The San Francisco 49ers drafted him in the second round of the 2011 NFL Draft. He was the 36th pick overall.

After an apprenticeship on the bench, Kaepernick took over the starting quarterback position from an established starter, and near-star, Alex Smith. He had been the overall Number One pick in the 2002 NFL Draft.

It was Kaepernick’s speed and elusiveness while running the ball that took the league by surprise. At the pinnacle of his football career, he led his team to a berth in the 2013 Super Bowl, where the 49ers came five yards short of the ultimate prize.

Before San Francisco’s third 2016 preseason game, Kaepernick sat on the bench during the National Anthem. He reached this decision after consultation with a former Green Beret, as a means of protest against police brutality against blacks, and all forms of systemic racial injustice in the United States. Throughout the 2016 regular season, Kaepernick took a knee during the playing or singing of the anthem. 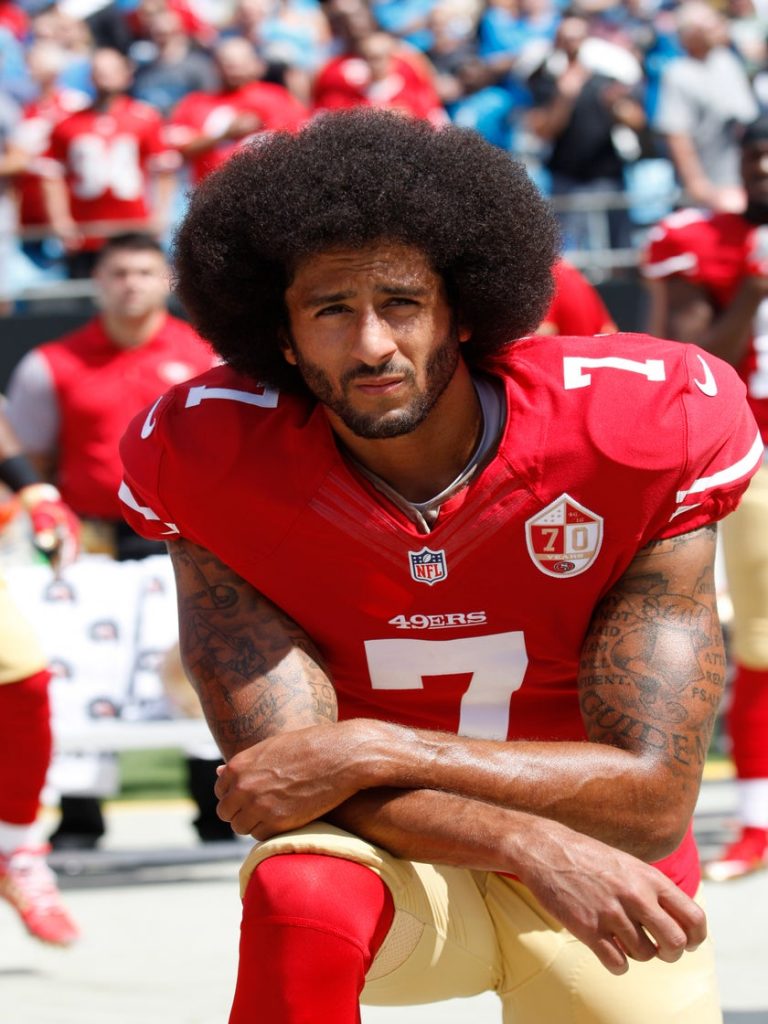 Some praised Kaepernick’s stand against racism, while many others denounced the protests. His actions lit a fire under some of the league’s players, and a movement got underway. The movement only grew stronger in September 2017 when President Trump advised the NFL owners to “fire players who protest during the national anthem.”

Kaepernick’s contract with the 49ers ran out at the end of the 2017 season, and he became a free agent. One would have thought his skill level and resume’ would have brought up to fifteen offers from other teams in the league. But, no offers came Colin Rand Kaepernick’s way.

How is that even possible, given his skill set?

“It’s obvious Kaepernick is being frozen out for his political opinions.” FiveThirtyEight went on to say, “It’s extraordinary that a player like him can’t find a team.” They based this observation on these facts. “No above-average quarterback, as measured by QBR, or Total Quarterback Rating, has been unemployed nearly as long as Kaepernick, this offseason.”

In November of 2017, Kaepernick filed a grievance against the National Football League and its individual owners for collusion to keep him from making a living in his chosen profession. Seventeen months later, Kaepernick withdrew the suit when the NFL settled with him for an undisclosed sum.

That would have been the end of Colin Kaepernick as an up-front news entity.

Colin Kaepernick has given millions to causes that fight against endemic racism in the police, and elsewhere against the black community. He has also reached out to the NFL to carve out a peace settlement so he can play ball again. But all of these steps are behind the scenes and out of the spotlight. To some, he is a victim, to others a galling provocateur. But to all, his case was a part of the past.

That is correct and to his credit, Colin Kaepernick never once came forward and said, “After Mr. Floyd, how do I look now?” But given the national, and international, upheaval caused by the George Floyd incident, it was inevitable that people would start to remember a lone figure taking a knee in silent protest. Golden State Warriors’ Head Coach Steve Kerr has this to say about Colin Kaepernick and his protest.

“My sense was that Kaepernick would ultimately be considered a hero. Eventually, Colin will be recognized for the gesture that he made and the price that he paid. “I’m glad that the NFL is now supporting him. I do think this feels different this time. More and more people are becoming aware of what the experience is for the African-American community.”

Earlier this month, NFL Commissioner Roger Goodell put out a statement that did not mention Colin Kaepernick by name but should have. In the statement, Goodell apologized on behalf of the league for “not listening to NFL players earlier and encouraging all to speak out and peacefully protest. We, the National Football League, believe Black Lives Matter.”

What is next for Colin Kaepernick?

He hasn’t played ball in four years. Are his athletic skills still intact? Also, does he want to let the league use him as a figurehead for change? He would know if there isn’t a change at the core.

Some would like to see Colin Rand Kaepernick head up a joint venture with the National Football League. The venture would channel tens of millions of dollars to inner-city schools. We would like to see him be the face of a national program of re-education of police forces. From the smallest force to the largest. That would be better than a naked apology. Mostly though, we would like to see the ongoing conversation in this country organically remove the stain on Colin Rand Kaepernick’s image and reputation. He was a man ahead of his time. One of the forgotten people, all too often.

How to Keep Armadillos from Ruining Your Landscaping or Garden