Home » Our World » The Evolving Future: Will There Be Dinosaurs?

The news that has people hyped up is from scientists, regarding dinosaurs of the future. That’s right, the possibility of dinosaurs in the future is now appearing to be more likely with recent discoveries. You may be asking, how exactly would this all work, and in the evolving future: will there be dinosaurs?

DNA Is the Key

Scientists have said that they will be able to use DNA to bring some dinosaurs into existence. How in the world can they do this?

The answer is by using the DNA extracted from chickens. The reason for this is that dinosaurs are the ancestors of birds, so the DNA is a close enough match to be able to recreate a dinosaur from it. This may seem crazy to you, but there have already been experiments on a small scale to see if it can even be possible.

Chicken embryos have been manipulated by flipping specific genetics in them to conduct reverse-engineering. It is as magnificent as it sounds – some scientists turned a bird’s beak into a snout that is like that of a dinosaur. 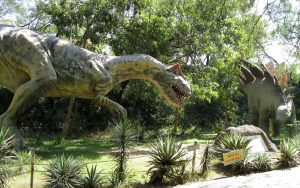 By this point, you may be envisioning a certain movie that did well on the box office charts yet struck terror into many people’s hearts – Jurassic Park and its sequels, including the 2015 Jurassic World film. Who would have ever thought that such a film could content some nugget of truth for our real world?

Dr. Jack Horner is the head of the team who has been conducting experiments to bring the dinos “back to life”. He states that chickens have several traits that are in common with the prehistoric beasts. Dr. Horner was one of the scientists who gave consultation for the Jurassic Park series.

The team will be doing more experiments, with a particular focus on four key areas – the mouth, arms, hands, and tails of these animals. Dr. Horner considers the tail to be the most challenging part to tackle, though he also mysteriously says that there is hope after some of the team’s more recent successes. This will be a full-out reversal of evolution that will seem miraculous if it can be carried out by this team.