Have you ever wondered who is the first female, self-made millionaire in the country? The answer is more surprising than you would initially think. It’s not a well-off white woman from the beginning of the 20th century. The answer is Madam C.J. Walker, whose story has been called “one of the most spectacular rags-to-riches stories in U.S. history.”

Madam C.J. Walker was born in Louisiana, on a plantation in 1867 and she became an orphan at the tender age of 7.

She was born as Sarah Breedlove to sharecroppers on the same plantation where her parents had been enslaved before the Civil War. Although, an orphan at the age of 7 she became the first female self-made millionaire in the country. There is no excuse for failure for anyone else, right? She started her empire as a single mother who was the target of abuse and discrimination. It was not easy being a black woman at the end of the 19th century.

So how did it happen? In the 1890s, Walker experienced hair loss and looked for solutions to stop the hair loss. She experimented with different home remedies and different products offered on the market, she even consulted her brothers who at the time worked in a barbershop. 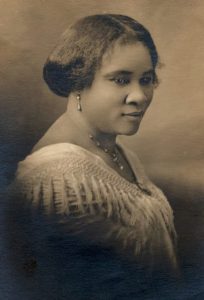 If you have a problem and there is no solution on the market, then there’s a lot of people with the same issue looking for a solution. That’s probably the main trick of how to find a product to offer to the market and people who are willing to buy it. That’s exactly what she did and that’s something she understood. She developed Madam Walker’s Wonderful Hair Grower, which was a healing formula and scalp conditioning treatment that became popular around the country after a while.

Her business grew especially among other African-American women who had a similar issue. Reportedly Walker once said:

“There is no royal flower-strewn path to success. And if there is, I have not found it, for if I have accomplished anything in life, it is because I have been willing to work hard.”

“Her death recalled the unusual story of how she rose in twelve years from a washerwoman making only $1.50 a day to a position of wealth and influence among members of her race. Estimates of Mrs. Walker’s fortune had run up to $1,000,000. She said herself two years ago that she was not yet a millionaire, but hoped to be some time, not that she wanted the money for herself, but for the good, she could do with it. She spent $10,000 every year for the education of young negro men and women in Southern colleges and sent six youths to Tuskegee Institute every year. She recently gave $5,000 to the National Conference on Lynching.”

Not only that she was a hardworking woman who decided to make the best of her situation but she was also a caring and giving person, who understood the importance and power of education.

Even today, Walker is an inspiring figure to many female entrepreneurs, especially black women. Lori L. Tharps, who is a co-author of “Hair Story: Untangling the Roots of Black Hair in America” said to the USA Today:

“Her genius was not so much her products, but the marketing and the idea of giving black women the gift of pampering themselves, of allowing them to take pleasure in cosmetics and hair grooming.”

The ideas of giving and finding your way through discrimination and the most difficult conditions are as old as humankind and Madam C.J. Walker is a prime example of how to overcome your difficulties and oppression.