Home » Travel & Nature » The Five Most Famous US Navy Ships

The Five Most Famous US Navy Ships: Old Ironsides, the historic USS Constitution at Charlestown on May 29, 2011, in Boston, MA

The United States Navy has had a riveting history, which involves taking on the greatest naval power in the world to traveling beneath polar ice caps. While there are lots of warships, aircraft carriers, and submarines that have all played important roles, five of them stand out.

The USS Constitution is a warship built from three layers of oak with copper fastenings made by the silversmith Paul Revere. The ship got her nickname “Old Ironsides” during the War of 1812. Her opponent was the HMS Guerriere, and while the Americans did not win that battle, her durability led to crew members claiming she had “iron sides” that cannonballs couldn’t pierce. Currently, the USS Constitution is still a commissioned warship but limited to appearances in Boston Harbor and as a museum.

This ship first gained fame when it served as the lead for President Wilson’s voyage to France in the early 1900’s, but it was her destruction that made the ship unforgettable. The ship docked at Pearl Harbor sunk by one of the bombs dropped by the Japanese killed over 1,000 crew members. You can visit the USS Arizona memorial, which opened in 1962. 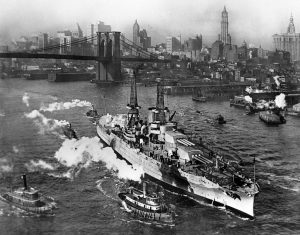 The Five Most Famous US Navy Ships: View of USS ARIZONA taken from Manhattan Bridge on the East River in New York City on its way back from sea trials. December 25, 1916

This is the ship that accepted Japan’s surrender during WWII. She is the biggest battleship ever constructed with measurements of 900 feet long and 200 feet high. She is also the last battleship the Navy ever made and has seen battle during WWII and Operation Desert Storm. In 1995, the USS Missouri was officially removed from the active ship registry, which allowed the Navy to donate her as a memorial museum.

The USS Enterprise (CVN-65), despite her name, is not a spaceship. She came first, and most likely inspired the name of the famous Star Trek vessel. The sea-bound Enterprise is still the longest naval vessel in the world and was the first nuclear-powered aircraft carrier. She served from 1962-2012 during the Cuban Missile Crisis, Vietnam, and Operation Iraqi Freedom.

Launched in 1954, the USS Nautilus was the world’s first nuclear-powered submarine. Her most notable contribution to the Navy was the top-secret mission, “Operation Sunshine.” In fulfilling this mission, the USS Nautilus became the first submarine to travel beneath the Arctic ice. This was a big US victory since the Soviet Union didn’t have nuclear-powered subs. In 1981, the submarine became a National Historic Landmark, and in 1986, she became a museum.

Virtual Wellness: Get Fit and Stay Healthy From Home