{Gavel, gavel, gavel! Gavel, gavel, gavel!} Could I have your attention across the convention hall? Meat eaters on the right wall, and vegan/vegetarian on the left wall! Could you come together in the middle of the room, please? Oh, you won’t? Because you can’t? You say you never will? Well, guess again, because there is a revolution underway and groups such as yourselves are at the crux of the matter. The Impossible Burger is doing for you what negotiators in the Middle East have forever failed to do. Namely, brought a meal to the table that all can share.

In most families, meat-eaters and vegetarians form a tenuous detente over the issue of meat. The result of the truce is a separate meal for the two sides of the equation.

Carnivores love seared steer, flipped over once and served red. Vegetarians and vegans get by with a soy-vegetable burger patty alternative that they claim to accept. (We think they are taking one for the team when they eat that glop, but okay.) The two sides stare at one another, with a sneer at the ready. What would we give to end this standoff? Did I mention the Impossible Burger?

Okay, I’ll bite (no pun intended). What is the Impossible Burger?

Impossible Foods makes the burger concoction with a foundation of four ingredients. They are protein, fat, binders, and flavor. But, an Impossible Burger’s protein isn’t from an animal. Instead, it’s a soy/potato protein blend.

That sounds promising, but I have seen and heard soy burgers cooking. They don’t have that burger sizzle.

Listen to an Impossible Burger while it cooks. The juicy sizzle comes from sunflower and coconut oils. They are the Impossible Burger’s fat sources. To hold all this together, Impossible Foods uses methylcellulose. That’s a bulk-forming binder that serves as a source of fiber.

So, it looks right and sounds right. But you know as well as I do that there is a more important question to ask. Does an Impossible Burger taste like a burger?

You can trust Gildshire. We are the folks who gave you the best burger in every region of the country not too long ago. 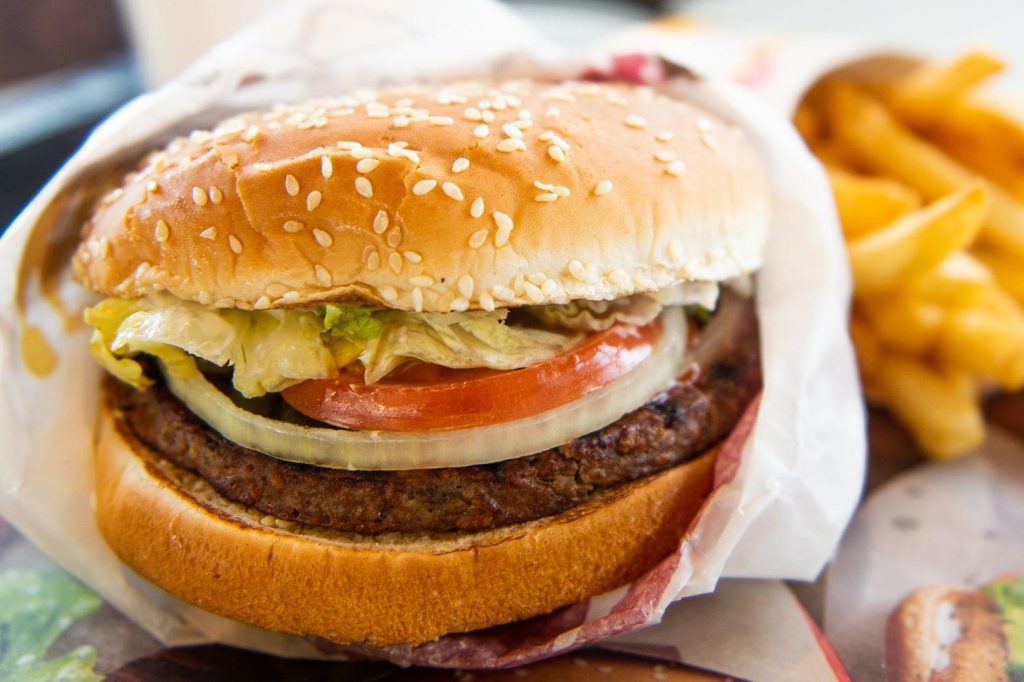 Try the Impossible Burger. You’ll like it. We promise.

It tastes like beef. The average consumer, whether carnivore or vegetarian, will enjoy it. For beef connoisseurs (the “I only eat Kobe Beef” crowd), the Impossible Burger is…close.

I never thought I would say this, but I might actually try one. Where can I get an Impossible Burger?

Red Robin and Burger King either have them already or will have them soon, depending on where you live. The same holds true for White Castle and Umami Burger if you have one of those nearby. By the end of this year, your local Little Caesar’s will be using Impossible Burgers (cut up, of course) on your ground beef pizza. For now, the Incredible Foods website has a finder for where you can get an Impossible Burger tonight.

The Impossible Burger is proving to be the popular new food item for 2019, obviously for all of these good reasons. However, the popularity of the burger is creating, of all things, a temporary shortage. Impossible Foods is holding fast to their rollout plans, but they are working overtime to do so.

Whoever thought there would be a shortage of beef that isn’t beef in these United States of America?

Those are our thoughts, as well. Let’s talk more about it when our mouths aren’t full of the Impossible Burger.

4th of July Celebrations Worth a Road Trip