The Magic of Mochi

A rising star in the food world, mochi is actually an ancient Japanese sweet whose origins date back thousands of years. What is it exactly? It’s a short-grain rice that’s pounded into a paste, and then molded into shapes, most often spheres. Before pounding, the rice has to be soaked and cooked. Next, someone rotates the mochi in a mortar while their partner pounds it. It’s hard work, so many use machines that speed up the process. There’s still room for the traditional method, however, and mochi-makers like this speedy gentleman attract crowds. 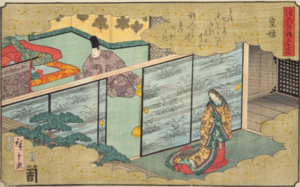 In “Tale of the Genji,” mochi is mentioned

Mochi first appears in history during the Yayoi period, which lasted from 300 BCE to 300 CE. The treat was reserved for the Emperor and other nobles, while in later years, it was considered food for the gods and used in Shinto rituals. During the Heian period (794-1192), everyone started experiencing mochi. It became part of New Year’s festivals, and has remained a staple of the celebration.

While the rice dessert is most closely associated with Japan, it’s also very popular in Taiwan. There, you can find a Taiwan Mochi museum. You can also find it in China, and it’s believed that Taiwanese mochi-makers influenced the Chinese food world.

Lots of variations of mochi exist. Daifuku was first invented in the 18th century. Molded into a ball, this candy is filled with sweet red bean paste, and wrapped in either white, green, or pink rice dough. One of the most popular kinds today is known as the “ichigo daifuku.” In addition to the sweet paste, it has a fresh strawberry inside. First sold in 1985, you can find it in only four Japanese neighborhoods. Manju, which originally came from China, is flavored rice dough with a sweet bean and fruit filling. You can also find savory mochi, like kaku, which is lightly toasted and wrapped in seaweed, or ozoni, which is mochi soaked in chicken, fish, or vegetable broth. 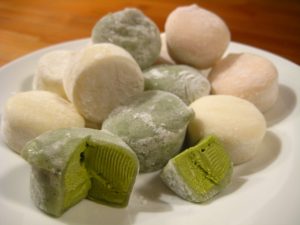 Mochi no longer just describes the simple rice-paste treat. Mochi ice cream is one of the most popular innovations. It consists of a thin layer of traditional mochi that’s wrapped around a ball of ice cream. Frances Hashimoto is credited as the inventor. As the CEO of Mikawaya, Frances specialized in making Japanese treats for an American audience. Her husband had the idea to wrap ice cream in rice dough, and Frances embraced it in 1993. The treat has since become so popular that when people say “mochi,” they’re often referring to the ice cream.

There are countless flavors, from chocolate to green tea. You can find them in the US at places like Trader Joe’s and Whole Foods, which has its own self-serve mochi bars. Costco also sells mochi ice cream in huge packs.

Can you make your own mochi? You can! Most recipes ask for sweet rice flour (which means you don’t have to pound rice into a dough), coconut milk, sugar, and water. You mix the sugar, flour, and liquid together, and pour into a lined baking pan. That bakes for an hour, and then cools overnight. To stretch it out and flavor it, dust a cutting board and knead in the flavors. Cut into small rounds, and then roll into balls. The ice cream is a bit harder to make, because it requires very hard balls of ice cream, but once you have both the dough and ice cream balls, simply wrap and wait five minutes before devouring.

Bubble tea is another sweet treat from Asia that’s taken the world by storm. Learn about it here!

Celebrities Who Have Battled Mental Illness

What are the Pressure Points for Sleep?

Why Setting Aside Time To Relax Is Crucial...