Home » Style & Creativity » The Most Famous Houses In Literature

A place can become its own character in literature and in many books, that place is a house. These physical places are often metaphors for the growth characters go through or serve to establish strong emotions in the reader like fear or security. Here are the most famous (or infamous) houses:

When the orphan Anne Shirley first sees her new home, she falls immediately in love. Green Gables, the farmhouse where Matthew and Marilla Cuthbert live, becomes a symbol of safety and love for both Anne and the reader.

The home of Pippi Longstocking, this unique house is a children’s paradise. Because she doesn’t have parents, Pippi has the run of the place and keeps her pet monkey and horse indoors. There’s even a tree that grows full soda pop cans in the backyard!

In Daphne de Maurier’s classic novel, the very first line is “Last night I dreamt I went to Manderley again.” This grand country estate is much more than just the setting for the story’s action; it serves as a hunting ground for the unnamed main character’s psyche. Everywhere she looks, she sees Rebecca, her new husband’s first wife, and even though there are no literal ghosts, Manderley is definitely haunted.

Though the castle is featured only in the novel’s first part, it stands out as one of the creepiest places in literature. Full of cobwebs, damp corners, an undead vampire wives, Castle Dracula is where poor Jonathan Harker nearly meets his death several times and learns that his new real estate client is anything but normal.

Big and imposing, Thornfield Hall is the perfect Gothic setting for Charlotte Bronte’s Jane Eyre. Despite its foreboding aura, Jane falls in love with the place as well as with its master, Mr. Rochester. Everything is going well for Jane until she learns who that mysterious woman in the attic really is. 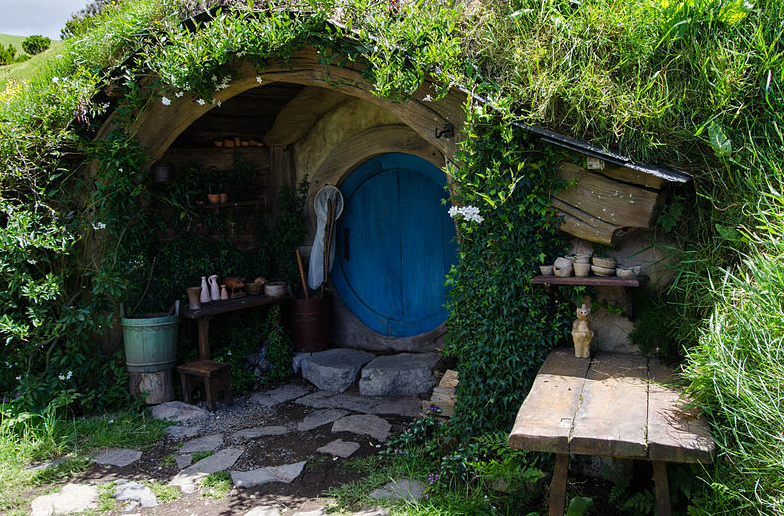 The first few pages of The Hobbit are spent describing Bag-end, the hobbit hole that Bilbo calls home. This setting is important because it shows how much Bilbo values his peace and quiet, so when he leaves for his adventure, he’s taking a huge step. Getting back to his warm house is a driving motivation for Bilbo over the course of the book. CC/Photo credit

The Overlook Hotel – The Shining

The main characters may be taking care of this hotel during the off-season, but the rooms are full of ghosts. The hotel itself has malicious intentions and ends up possessing Jack, who goes insane and tries to kill his son. In the book (SPOILERS)- which ends very differently than the movie – Jack tries to prevent a boiler from overheating, but it explodes, destroying the hotel and killing him.

The world’s greatest detective calls this address home. The apartment is usually quite messy, much to landlady Mrs. Hudson’s dismay. When he’s not conducting experiments or thinking, Holmes can be found here playing violin or smoking.

Tara – Gone With the Wind

Scarlett’s beloved plantation goes through a lot in Gone With The Wind. At the beginning of the novel, it’s a blissfully-happy place for parties, but once the Civil War hits, it becomes abandoned and desolate. However, it survives, and at the novel’s end, Scarlett decides to return as it represents strength through hard times.

Heroine Elizabeth Bennett has already turned down a marriage proposal from the proud and rich Mr. Darcy when she visits his house, and it’s so beautiful, she wonders for a moment what being the lady of it would be like. The grand place is also where Elizabeth eventually gets to know the real Darcy and he wins her heart for good.

——
The hotel from The Shining is an important fixture in both book and movie form. Here are other horror movie locations you can visit.

How to Plan a Green Remodel in 5 Steps

Why You Could be More Dehydrated During the Winter?