The Most Unusual Grounds For Divorce

Home » Healthy Lifestyle » The Most Unusual Grounds For Divorce

The end of a marriage is never easy, even if it’s what’s best for both people. While the most common reasons for divorce – cheating, money problems, the question of children – are familiar, there are some more unusual grounds for divorce in different countries, and even in the United States. Here’s a handful:

A third person intentionally tried to break up your marriage

In seven states in the US, you can sue a third party for interfering in your relationship and causing your marriage to end. To win any money, you would have to prove that this was the person’s intent, which might be tricky. Get a good lawyer!

The wife and in-laws don’t get along

In ancient China, specifically in the Song Dynasty, it was crucial that a man’s wife treats his parents well, even better than her own mother and father. If his parents weren’t pleased with the wife’s efforts, it was a legitimate reason to end the marriage.

You got married as a joke

In Delaware, if you get married as a joke or dare, you can use that explanation to get an annulment. While some might claim that this cheapens the sacredness of marriage, it’s probably a good thing that two (probably drunk) people who thought getting married would be hilarious are not forced to stay together. 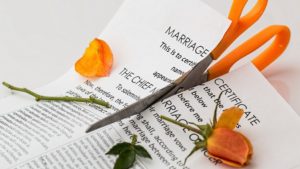 The Most Unusual Grounds For Divorce

The wife got false teeth without asking permission

In Vermont, a husband can divorce his wife if she got false teeth without asking him. We’re not sure how often this reason comes up in court.

Your spouse is trying to poison you

In Tennessee, it’s written that attempted murder “by poison or any other means showing malice” is a legit reason to get divorced. That obviously makes sense, but it’s so specific, it makes you wonder how often that was happening for that to be put down in the books.

“Unreasonable behavior” can include dressing up as a Klingon

In England, no-fault divorces aren’t a thing, so couples have to define “unreasonable behavior,” which is grounds for divorce. In one case, a woman said that her husband kept asking her to dress up as a Klingon.

What is the Difference Between Satisfaction and Happiness?