Home » Our World » The New XFL: Can Spring Football Work?

No sooner has the confetti settled on the Chiefs’ parade through downtown Kansas City (which is in Missouri, btw)than the inevitable post-football malaise begins to settle in. More than a month until March Madness and two months until meaningful baseball is played. What is a sports fan with limited interest in the Daytona 500 (but check out our Daytona 500 preview next week!)to do? That is, until this year! Because of this coming weekend and the start of football all over again. Football’s newest try at a spring league kicks off with the advent of the new XFL. What is the new XFL? How will it differ from the old XFL? Will XFL football be any good? Do I have a local team in the league? Are there betting lines? Today, and right here, Gildshire answers all the questions.

What is the new XFL?

The XFL (it isn’t actually called the NEW XFL) is the relaunched brainchild of wrestling’s Vince McMahon. You may remember that he was in charge of the last XFL that began play in 2001. That league had ties to the WWE and included gimmicks such as the teams racing to the middle of the field for first possession and nicknames (remember “He Hate Me”) on the backs of the uniforms. This iteration of the XFL has no such ties and is a standalone league.

How many teams are there?

Just like in the first incarnation of the XFL, this version will have eight teams spread across two conferences. The Eastern Conference includes the DC Defenders, the New York Guardians, the St. Louis BattleHawks, and the Tampa Bay Vipers. The Western Conference consists of the Dallas Renegades, the Houston Roughnecks, the Los Angeles Wildcats, and the Seattle Dragons. 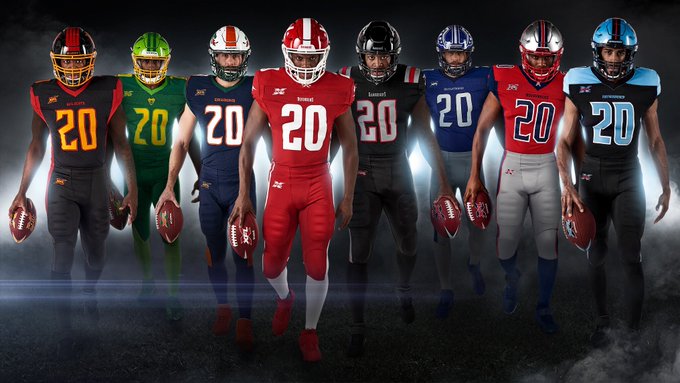 When does the season get underway?

This weekend! The regular season is 10-weeks long, Feb. 8-April 12. The league will play doubleheaders on Saturdays and Sundays,(meaning four teams each playing one game. Not doubleheaders as baseball plays them.) except for two Thursday night games in Weeks Nine and Ten. Most of the games will take place in the mid-afternoon and early evening. Each team will play their three conference rivals twice in a home-and-home format and four games against the opposite conference.

Sounds good. How can I watch it?

Are the rules similar to what I see in the NFL?

You will recognize it as football, but there are a few rule changes. Athlon Sports spells them out here.

How much are the players paid in the XFL?

There’s a salary/bonus structure that means quarterbacks will make about $125,000 in base salary and more if his team wins. Other players will make between 26k and 50k. All players receive health insurance.

Will I recognize any of the players?

Anyone who follows both college and pro football should be familiar with many of the players. The Head Coaches are all familiar names, at least to long-time football fans.

Will spring football work in this, its third iteration? The XFL is well-funded, and the principles are talking confidently. Gildshire will be watching to see if the quality is good. The first games are Sat. Feb. 8 when Seattle plays at Washington DC (2 pm eastern/11 am pacific) on ABC, followed by Los Angeles at Houston (5 pm eastern/2 pm pacific) on Fox.

Winter Must Have Essentials in Your Wardrobe this Year