For the past 17 years, New York Botanical Garden (NYBG) puts on the Orchid Show. Like every year, NYBG chooses a theme for the show and this year they chose to honor the “City in a Garden,” which we know to be Singapore. In collaboration with Gardens by the Bay and the National Orchid Garden at Singapore Botanic Gardens, the exhibition at NYBG highlights the Supertrees and arches that these sites in Singapore are known for.

The first thing that one sees when they enter the show is an 18 foot high model of the iconic Supertrees found ath Gardens by the Bay in Singapore. Supertrees are man-made, vertical towers of flora and fauna that mimic the functions of real trees using modern technology.

Continuing into the exhibition, the visitor sees a multitude of plants accompanied by a plethora of orchids. Orchids are the largest and most highly evolved flower family with over 30,000 wild species and hundreds of thousands of hybrids created by breeders. They grown on every continent except Antarctica in almost every type of habitat from desert to Arctic Tundra. Because of their beauty and exotic nature, orchids are frequently poached and harvested for sale illegally. On top of being threatened by deforestation and environmental change, orchids are among the most endangered plants in the world. NYBG is actually and orchid rescue and rehabilitation center for when illegally collected plants are recovered. NYBG is a part of the Convention on International Trade in Endangered Species of Wild Fauna and FLora (CITES), which helps to combat the exploitation of wild orchids. 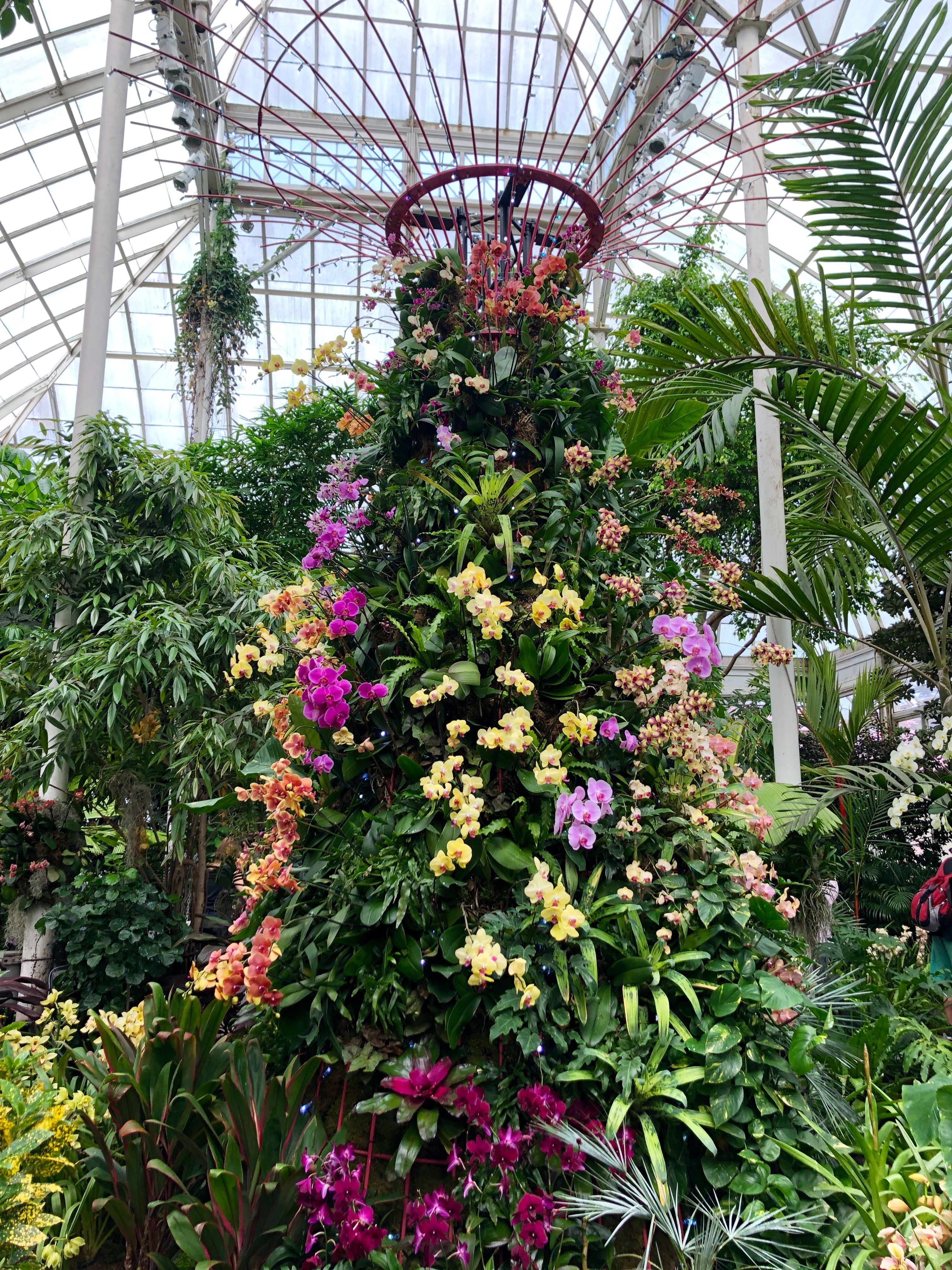 Singapore is one of the greatest orchid areas in the world according to NYBG’s director of glasshouse horticulture and senior curator of orchids. Orchids thrive in Singapore’s wet, tropical climate so they grow easily in parks, gardens, and street trees. Horticulturalists have cultivated and hybridized orchids since the 19th century and have developed more than 630 different types. In fact, Singapore is the only nation whose national flower is a hybrid plant rather than a wild one. Elected in 1981, Vanda Miss Joaquim became Singapore’s national flower to honor Singapore’s renowned history of orchid cultivation and cultural blend of its people. Named for its creator, Agnes Joaquim, the orchid is a cross breed of Vanda hookeriana and Vanda teres.

Even though it is highly urbanized and densely populated, Singapore is lush with green plant life thanks to Prime Minister Lee Kuan Yew who desired for Singapore to become an urban oasis of greenery. There are still laws today regarding planting and green spaces when building developments. Despite its size, Singapore currently has the highest percentage of tree-canopy cover of any municipality on the world. It sits at the tip of the Malay Peninsula, comprised of one main island and dozens of small ones that have a combined total area smaller than New York City. 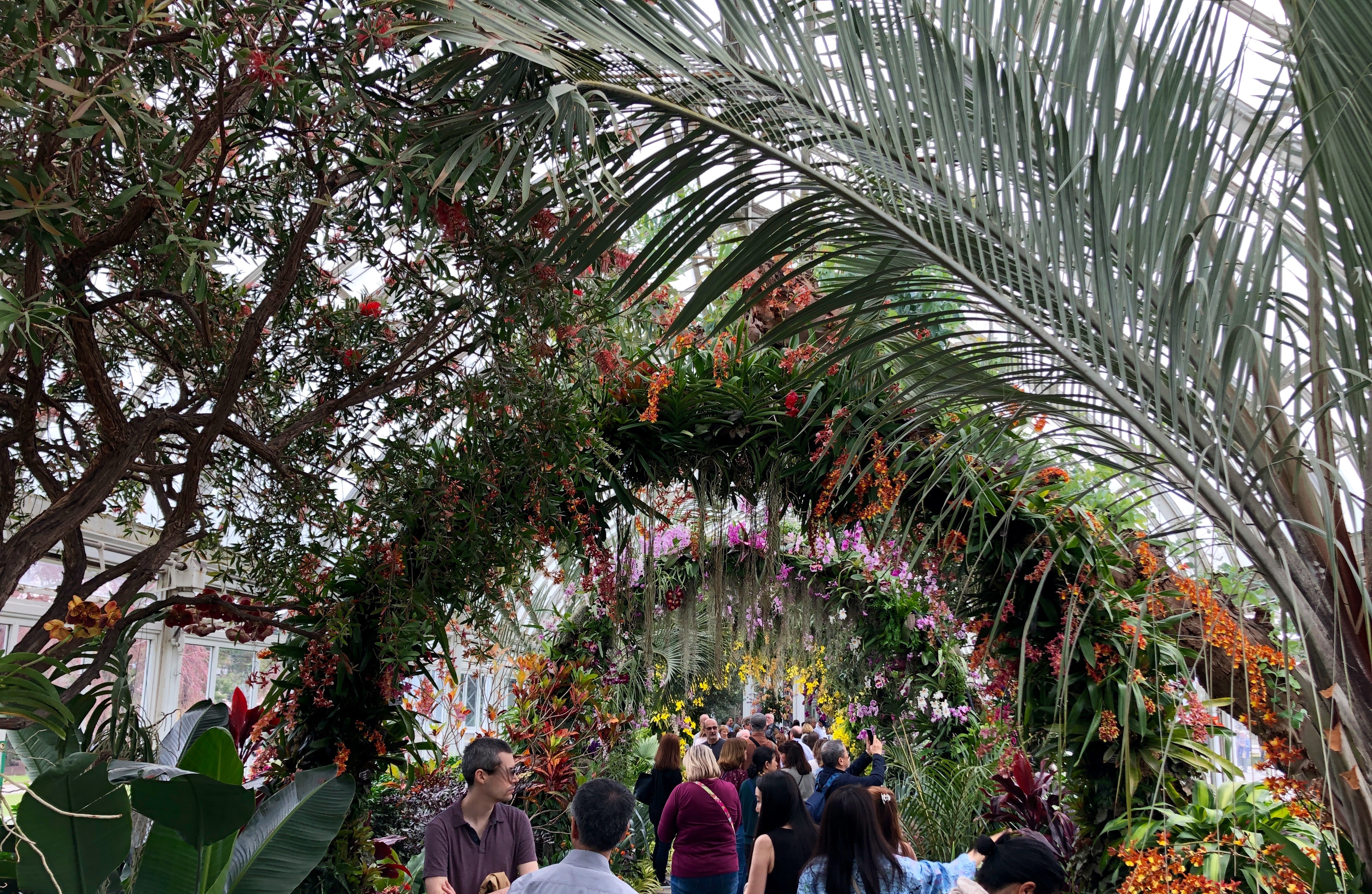 Walking around in the conservatory where the show was on display truly felt like a whole different place then New York. The botanists that set up the conservatory changed the atmosphere to viscerally feel like another city. While I have never been to Singapore, from what I have learned, the conservatory certainly felt similar to what I imagine it to feel like. Singapore is known for not only its greenery, but also its diverse cultural influences. NYBG offered a slew of cultural programming to give New York a taste of Singapore.

NYBG created a marvelous, horticultural spectacle of thousands of different colored and sized orchids. They surrounded the visitors from the very bottom of the ground to arching overhead. With the help from Gardens by the Bay and the National Orchid Garden at Singapore Botanic Gardens, NYBG was able to bring this hint of Singapore tradition and culture to New York for all to experience. The exhibition is only up until April 28th, 2019 so get your tickets now if you have not already!

How to Keep Armadillos from Ruining Your Landscaping...

Gardening 101: How to Build A Greenhouse

How To Design The Perfect Patio

The Benefits of Adding Water Features To A...

5 Decoration Ideas for Your Bedroom