Home » Travel & Nature » The Panama Canal: A Piece of History

The Panama Canal is a 48 miles long international waterway that allows ships to easily pass between the Atlantic and Pacific Oceans. Prior to its creation ships had to travel around the tip of South America, Cape Horn, adding nearly 8000 miles to any journey that required this transition. The Panama Canal has not always been an easy passage. In fact, the actual canal was at one time a point of contention that led to a revolution and eventually an international passage.

Beginning in 1819, Panama has been a part of the federation and the country of Colombia. However, when the United States first wanted to build a canal across the Isthmus of Panama, Colombia refused. This led to the United States supporting a revolution that ultimately led to Panama’s independence in 1903. Almost immediately, the Panamanian government authorized a French businessman named Philippe Bunau-Varilla to negotiate a treaty with the U.S. for the building of the canal. The treaty, known as the Hay-Bunau-Varilla Treaty, allowed the United States to build the Panama Canal. It also provided for the perpetual control of a five-mile wide zone on either side of the canal. 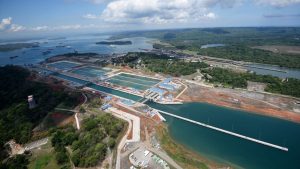 A Piece of History

What is the Panama Canal and why is it important?

The French had first attempted to build the canal in the 1880s. But it was completed following the treaty in 1914. It took ten years to create and once complete, the U.S. held a portion of land that ran across nearly 50 miles through Panama. Few Panama residents lived in the Canal Zone. It mainly inhabited by U.S. citizens and those from the West Indies who worked the canal. This meant little was contributed to Panama as far as the economy.

Needless to say, tempers flared at the lack of additional income for the country. In the 1960s anti-American riots flared. The U.S. and Panamanian governments worked together to solve the territorial issues leading to President Jimmy Carter signing a treaty that returned 60% of the Canal Zone to Panama. The remainder of the canal was returned to Panama in 1999. This transition was smooth since the majority of canal employees were Panamanian by that time.

Current day use of the Panama Canal is much the same as during its creation. However, an expansion started in 2007 has allowed much larger ships with more goods to pass through the Canal. Though the Panama Canal may have seemed unnecessary to many the time-saving passage is still a current time and money saver for those shipping international goods by boat or ship. This waterway is a way of life for so many in Panama. Yet many people around the world are probably unaware of how it came into existence. Now you are a bit better versed on a piece of history that is still in use today.

Why are We Judging Others Without Knowing it?

Do You Believe You are Introvert? Are you Right About it?