Home » Our World » The Path For the Return of Team Sports

The surrealness that has become this country enters its 3rd month today, and nowhere is the sense of “Where am I?” more prevalent than among sports fans. Our sports world(s) are locked down. A portion of the nation’s economy generating $71 billion annually is shuttered. Fans are without diversion, players are without a creative outlet for their gifts, and perhaps most tragically, support workers, many who make minimum wage, are unemployed. Is there a path for the return of team sports? Gildshire takes it sport by sport.

Some sports executives plot a return, but the floated scenarios range from absurd to dystopian. A biosphere in Vegas for the NBA playoffs. Baseball players away from their families for five months. Meanwhile, the NFL plans a “normal” season. Does anyone think they won’t have to go to plan b, c, or d?

Meanwhile, the only grownup in the room, Dr. Anthony Fauci, tells us an autumn surge from COVID-19 is inevitable, and without precautions that a weary country may be unwilling to accept, well, let’s hear it in his own words:

“We could be in for a bad fall and winter.”

Is the lack of sports really a big deal. I mean, people are dying…

Good question. Where does this lack of sports land in the harsh cultural landscape brought on by Covid-19? And where should it land? Some experts say it is more important than just people playing games.

“Sports represent our communal spirit, our ability to recreate and be joyous and be together,” said Elissa Epel, a professor in UCSF’s department of psychiatry. “It’s very important symbolically. But we have to think about the long-term risks of a communal, in-person event.”

Without turning this into a political debate, I think we can all agree that there isn’t a cohesive federal policy in place to guide us on reopening the country. That means that sports leagues will construct de facto national guidelines. That’s what happened when the pandemic first became apparent.

The NBA abruptly shut down in March, before the shelter-in-place mandates. When NBA Commissioner Adam Silver made the decision to shut down the NBA season, it established a course for businesses and government entities to follow suit. But, the NBA’s abrupt decision provides insight into how hard it will be to reopen sports.

The NBA put a stop sign on the season within moments of learning that Utah’s Rudy Gobert had tested positive for the coronavirus. The Jazz had played seven teams in five locations over the previous two weeks. Gobert could have infected hundreds. You can’t tell me that Rudy Gobert isn’t in the back of MLB Commissioner Rob Manfred’s mind as he plots how to safely reopen his sport. The path to baseball is hazardous!

What are the leagues’ plans going forward?

The NBA began allowing players into practice facilities last week and is discussing playoffs in Vegas, where thousands of hotel rooms sit empty. Meanwhile, MLB is all over the map. A half-season in Arizona or Florida? Realigning divisions to reduce travel? Meanwhile, the National Football league sits mum, at least publically.

The path to the NFL involves the luxury of timing. They can wait and watch other leagues. It gives them a blueprint.

Every reasonable scenario requires guidelines for testing, retesting, and quarantining. With tests still unavailable to many, the tens of thousands of tests for athletes and staff could cause a backlash.

“I hope when we get to that point, when we’re going to try to get the sports figures tested, then we will have enough tests so that anybody who needs a test can get a test,” Dr. Fauci told the New York Times.

What happens if another Gobert turns up? In Japan, the professional basketball season scheduled a restart last month, but three players tested positive. That season is delayed indefinitely. 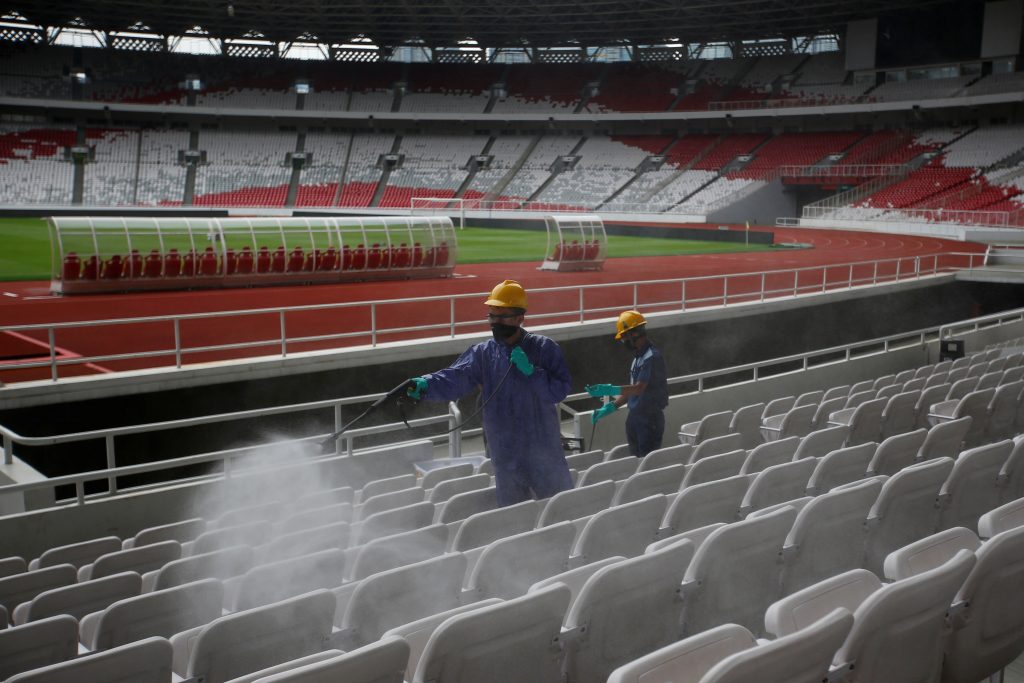 The Path For the Return of Team Sports: The path to full stadiums is an unsure and winding path.

The Bundesliga, Germany’s most prestigious soccer league, planned to open late last month. But ten players tested positive. Opening a sport, only to close it again, isn’t worth it. Isn’t it better to call the 2020 calendar year a wash? We may have dodged a bullet in a major city.

The head of the UCSF’s COVID-19 Command Center said this:

“A biological bomb could have gone off had the 49ers won the Super Bowl and held a parade on Market Street in the first week of February.”

I’m guessing that college sports could be a big problem

The path to college sports, namely football, present a different set of issues. The Southeastern Conference is frantic to get football back sooner than later. But can 100,000 fans cram Neyland Stadium without 1,000 of them contracting Covid-19? That’s a biological bomb. Besides that, school after school is announcing online classes for fall. Can, or should, football take priority if it isn’t safe for students?

“There is enormous political pressure on sports teams to open back up,” said Stanford economics professor Roger Noll. “And that can cause a natural inclination to open too soon, because of the psychological impact. The getting back to normalcy’ aspect. But they can’t afford to be wrong. They can’t have sports become the next nursing homes.”

So the path to return to sports is a winding one. It will have blind corners and places where confusion will be the order of the day. But, it will show up and guide us back home by faltering light. That seems to be the way of 2020 anyway, doesn’t it?

How To Create A Fashionable Modern Garden