written by Emmaline Soken-Huberty May 6, 2020

Home » Healthy Lifestyle » The Power of the Ginger Root

Ginger is a flowering plant whose roots are popular in cuisine and medicine. Recordings of its use are present in ancient literature from Asia, Europe, and the Middle East. On their travel, Marco Polo and other explorers noticed how ginger made people rich, and their documentation helped make ginger the most cultivated herb in the world to this day. Currently, India and China produce the most ginger, with India topping another list as the biggest consumer of ginger.

You can use fresh ginger for just about anything, including as a spice for food or steeped in hot water for tea. It has a spicy, slightly sweet, and almost lemony flavor and a strong smell. Indian and Asian cuisines, in particular, favor ginger for a variety of dishes. While fresh is always best, it’s sometimes more convenient to go with ginger powder. Pickled ginger is also very popular, and is often put alongside fresh fish and sushi. Sliced up pickled ginger for salads and use its juice as salad dressing. Other varieties of ginger include ginger sodas, crystallized ginger candy, or even ginger beer, the alcoholic kind. 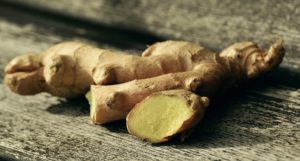 What is the Power of the Ginger Root?

Consuming ginger in any form, including capsules and as an essential oil, has impressive health benefits. It’s most commonly used to treat stomach issues, like nausea, vomiting, and diarrhea. It’s also a powerful anti-inflammatory agent and pain-reliever, so you can take ginger to fight arthritis and headaches. You can even rub a small piece of cut ginger right on your skin to fade stretch marks and scars. It’s also a great ingredient for DIY foot and body scrubs.

For pregnant women suffering from morning sickness, ginger can be very helpful in tea, capsules, or as a soda, provided that the company uses real ginger. To make ginger tea, simply steep grated ginger in hot water and enjoy with or without honey. If you anticipate getting sick during a plane or car ride, ingest one gram of powdered ginger a few hours before to head off some of that nausea. If you feel a cold coming on, eating a dish with ginger or drinking ginger tea will help clear your sinuses quickly.