Home » Our World » The Science of Lying

Everyone lies. How often and about what may be different, but lying is something all people do. Twenty years ago, 147 adults were asked to keep track of every time they tried to deceive or mislead another person. After a week, the results were in: everyone lied on average 1-2 times a day. 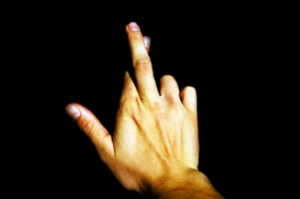 When lying, kids will sometimes cross their fingers as a trick

Why do we lie? Studies have shown that lying begins at an early age, though we aren’t very good at it. As we get older, we get better. Since lying is so innate, it appears to be linked to evolutionary behavior. The simple concept of tricking another person lets you stay safe or avoid some kind of harm. Before language, everything would be settled physically, but once humans began talking, lying was a natural result. If physical conflict could be avoided, that was a good thing. Those who weren’t good at fighting had an advantage when they lied.

Lying can actually affect the brain. In 2005, a psychologist did a study where they looked at brains scans of three groups. The first had a history of repeated lying, the second did not but had antisocial personality disorders, while the third didn’t lie frequently or have a social problem. Those who lied frequently – that first group – actually had 20% more neural fibers. This could mean that liars had more connectivity going on in their brains, which makes sense, since frequent liars have to be quick thinkers, if they hope to keep their lies straight and continue the deception. As for the feeling of guilt, the more we lie, the less our brains react, specifically in the amygdala region. The amygdala is the center of emotions.

Humans lie for a variety of reasons, and not just to avoid getting punched. People lie to protect the feelings of others or to hide their own failures or sense of inferiority. Lies involving facts are designed to project a false image and produce a more desirable outcome than if the truth were told.

The most intriguing and confusing type of lying, however, is the pathological kind. This is lying when there doesn’t appear to be any motivation behind it, and the lies are easily debunked. About 1% of the population constantly lies, and it’s divided equally between men and women. When brain scans have been done, about 40% have abnormalities in their central nervous systems, like head trauma, ADHD, and or epilepsy. While pathological lying is categorized as a disorder, it can be very tricky to treat, because the person first has to admit they have a problem. 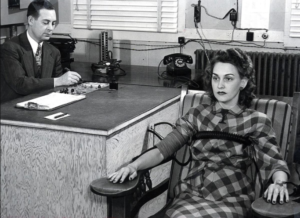 In 1945, a woman takes a lie detector test for security

How can you tell when a person is lying? That question is one that people have been trying to solve for years. Clues like quicker breathing, sweating, and other physical manifestations can reveal lying, but expert liars won’t display these symptoms while signs of discomfort are present in people who are just uncomfortable. Could a computer crack the puzzle? When trained, computers were actually able to pick out people telling lies about 90-95%, which is 10% better than the best human lie-detectors. What gave computers the edge? Apparently, how people clicked their mouses around when giving false answers to questions online made all the difference.

Other technologies designed to detect liars include MRI imaging and thermal imaging. The last test identifies the temperature of someone’s eyeballs, because people’s eyes get warmer when they lie, apparently. There’s still no set standard for lie-detecting, and it’s doubtful there ever will be. Humans are just so unique, as are their lies.

Journalists have a duty to report the truth, but often, they fail. Here are six who got caught.