The Tank Man – Telling a Story with Photos

Home » Our World » The Tank Man – Telling a Story with Photos

Telling a Story with Photos

A man against the machine. Humanity against violence. Those might be the first thoughts that come to your mind when you see the photo of the tank man. A photo of a brave man who fearlessly stands in front of the dangerous big machine.

We all saw the photo of this young man, but nobody really knows who he is and what happened to him?! He bravely stood in front of a column of tanks on June 4. 1989. when the Chinese military suppressed the protestants on Tiananmen Square in Beijing. We do have some assumptions about his identity that we are going to share here. Let’s start with the photo and how photos can tell a story.

Capturing Photo to Tell a Story

One photo can sometimes send a message that we will fail to say with thousand words.

An ordinary man with his shopping bags stood fearless in front of the world, not knowing that this image will become history. Not only that he stood there without posing and without knowing that the photo will be taken, and it will become iconic. Furthermore, the photographer took a photo without attention to take a famous photo. The photographer knew something amazing is right in front of him and he had to take a photo. Like many photographers, he found a moment and captured it for eternity. Photographers take a photo to tell a story and it almost seems that it doesn’t matter who is the man. It’s any nameless man in front of any nameless machine.

Still, this rebel stays unknown to the world, although most of us saw his dance with a horrific war machine, his attention was to stop the machine not to be captured for all future generations to see. Sunday Express reported that his name is Wang Wei Lin and that he is a 19-year-old student, but that’s not telling us much. Nobody proved their theory about the Tank Man and his identity.

The unknown hero became a myth, and his name almost remained unknown. Not a lot of people heard about him, nobody made a big interview with the man.

What Happened to the Tank Man?

You might wonder if he is still alive? Did he get arrested? That would not be strange for China where many people who raise their voices do get arrested.

Author and Journalist Jan Wong who witnessed this scene said: “I don’t think they had him, or they would have, at that stage, displayed him…If you’ve ever seen security people manhandle a Chinese citizen, they’re really brutal… They twist your arm. They make you bend over. They punch you a few times. They kick you. So, to me, I think he was helped to the side of the road. He wasn’t being arrested.” 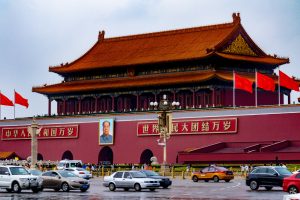 The Tank Man bravely stood in front of a column of tanks on June 4. 1989. when the Chinese military suppressed the protestants on Tiananmen Square in Beijing.

Photojournalist Charles Cole, who was also there, disagrees: “I feel very strongly that it was Public Security Bureau (PSB) people that got him. They were on the rooftops with binoculars and walkie-talkies, and they were controlling the outer areas of the square, as you would control any military operation, the high ground.”

Since there is no valid information about the identity of this man, there is no information about his whereabouts and his destiny. It seems like we have only opinions, not facts. There is a reasonable argument that he is still in China, live or dead. If he was abroad, he would be free to speak out. Unfortunately, China is a closed country where anyone who objects to the government can disappear from the face of the earth.

Was the Story Told with the Photo in China?

The story was told to the world with one photo, but the story remains unknown to China. Photographers can tell the story to anyone who wants to listen or anyone who wants to see the photo. Some photos are hidden from our eyes and even if we see them, we are not able to put a photo in perspective and understand the message. Here, we don’t even need to know the history of China or the background of the photo, but we completely understand the message of the photo. It seems that it doesn’t even matter where it happened. It could happen anywhere; the message is universal.

Although it could have happened anywhere, it happened in China and what’s interesting is that the photo is not known that much in China.

As a result of government censorship, young people in China don’t know a lot about the protests of students for economic and political reform that ended in blood in Beijing in 1989. When a young student in China saw this photo, he thought it is an artwork. Is it possible that our Tank Man is unaware of his fame in Western culture?