Home » Our World » The Ten Most Valuable Baseball Cards Ever Made

The Covid-19 virus pandemic enters its sixth month, and Social Distancing enters its second. During this time, Americans are discovering the joys of cooking together, eating together, and playing board games together. “Enough! You people are driving me nuts!” (Did I say that out loud?)Not to worry, because everyone needs a little alone time. What better way to garner that alone time than to spend a day looking through your old boxes? If, like many of us, you collected baseball cards, it is possible to find real value in some of those old cards. If, like a few of us, your Mom didn’t throw them away, because “These old things,” better yet. Who knows, you may have a treasure that will cover your retirement years and then some. Here are the ten most valuable baseball cards ever made. Oh, and if you’re missing baseball, this will help.

“How do I know if my cards are valuable?”

A card’s actual dollar value is dependent on several factors. The star power of the player is one factor. But, surprisingly, other factors are of equal importance.

“What are some of those?”

How many of the cards in question were ever made? That’s a big one, and you will see why when we get to the Holy Grail of cards. Other factors include the quality of the card. They are rated from a “1” (It spent time in the spokes of your bike, or having epithets scrawled across the face of the player.) to “10” (It has probably never been touched by the air or human hands.) A Professional Sports Appraiser (or PSA) determines the quality of the card.

“I get that. Are there other factors?”

If there was an error of facts on the card, the value just went up several-fold. You would be surprised how many times a print run had to be stopped because a player’s name was spelled wrong, or he was placed in the opposite league. You’ll see several examples of that error in our Top Ten most valuable cards.

At first glance, you may have thought that you stumbled on an error card right off the bat (no pun intended). After all, everyone knows that the greatest second baseman who ever played was “Honus” Wagner. Come to find out, Mr. Wagner was often nicknamed “Hans” by teammates and opponents alike. The high value on this card is due to its mint PSA rating. It is a wonder that anything 110 years old can be in mint condition. I’m about half that age. My PSA would be about 0.7. This card was recently auctioned off for $218,550.

The most valuable baseball cards that most of us collected were derived from photographs of the players. The General Banking Company cards were hand-drawn. Of the ones still in circulation, most are in pretty bad condition. That this one is an “8” adds a great deal to its value. This one was last auctioned for $272,980.

This card was once sold at auction for $33,000. That wouldn’t have rated a mention in a list such as ours. A few years later, it was re-auctioned and earned a bid almost nine times higher! The PSA rating was a large part of the increase, but sports collectible fans are a capricious lot. What was the winning bid? $274,950.

Love The Iron Horse. Who is next?

A player who was nicknamed “Slow” wouldn’t be an automatic guess to belong to this class. Doyle’s 22-21 lifetime record over five years, doesn’t shout “high card value” either. And a PSA of four? What’s going on here? Slow Joe Doyle spent most of his career as a Yankee. The card says he played for the New York Giants. It was last auctioned for $312,000.

This card is a high-value one, because it’s Hank Aaron, of course. But, also because of the company it keeps. Dmitri Young was a long time Detroit Tiger who was an avid baseball card collector. His collection was incredibly comprehensive. When Young sold it at auction, the collection’s individual cards became highly regarded simply because Dmitri Young had owned them. Last auctioned for $356,594.

Apparently, the folks at Sweet Caporal didn’t notice the error of Piedmont’s ways. They repeated the team/league error in a card run that was smaller than Piedmont’s. Hence the higher auction price of $414,750.

Roberto Clemente’s star only shines brighter as the years go by. His speed and daring on the bases, his power, and his rifle-like throwing arm are the stuff of legends. But, the way he lived his life, and the way he died heroically carrying aid the his home country of Puerto Rico only burnishes his sterling reputation. That’s why we doubt that his cards will ever decrease in value. This mint card auctioned for $432,690.

Mickey Mantle is a legend, but the trajectory path of this card is hard to believe! It went from $100,000 ten years ago to its current price. The card isn’t a rare one When the whole Social Distancing thing is done, you might want to visit a few yard sales. Last auctioned for $525,000.

Some collectors value rookie cards above all others, with good reason. A baseball player’s first card will grow in value faster than the rest of his career’s cards. Who wouldn’t want the first baseball card of the greatest player who ever put on a uniform? Yes, even with a PSA of three. Last auctioned for $538,500.

The top of the top! 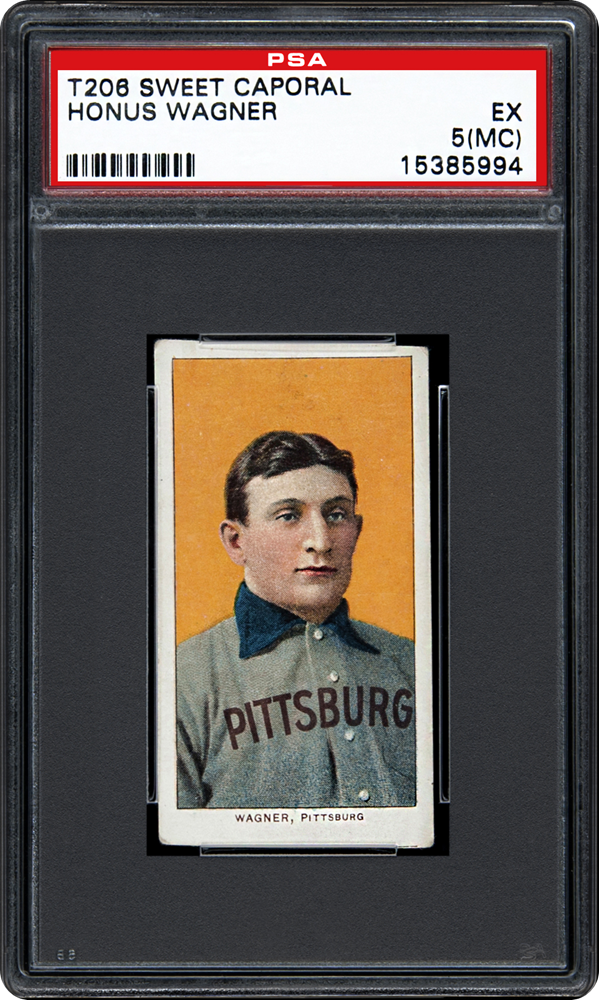 This is Number One of the top ten baseball cards ever made.

Remember when we mentioned the Holy Grail of most valuable baseball cards? Meet Mr. Wagner. This card’s value is due to several factors. Honus Wagner is on that shortlist of best players who ever lived. The age, and relatively high quality, of the card, are contributing factors to its value. But, the scarcity of this card is the driver to its price tag. Honus Wagner didn’t want to encourage his young fans to smoke. So the card run stopped when it hit two hundred. We hope that the scarcity of the card didn’t cause increased demand for Sweet Caporals. Last auctioned for $2.8 million.

Those are the Gildshire ten most valuable baseball cards in history. You know those old boxes in the garage. Do you think???