Now that the Super Bowl LIV matchup between the Kansas City Chiefs and San Francisco 49ers is set, Gildshire thought we would look at some of the best Super Bowls ever played. Ideally, every Super Bowl is a taut and thrilling battle between two great teams. Occasionally, they are snooze-fests interrupted by good commercials. Here is our list of the thirteen best Super Bowls.

Talk about two halves of a football game! The first 30-minutes featured an epic Falcons’ beatdown of the New England Patriots. Was this to be the ignominious end to the Patriots’ dynasty? Down 28-3 at the half, New England stormed back to force the first-ever Super Bowl overtime. They won on a pitch to running back James White.

The whole game was exciting, but many people only remember one play. Russell Wilson and the Seahawks’ “Legion of Boom” tried to go back-to-back in Super Bowl wins, and looked destined to do so. But, Wilson’s late-game pass from the Patriots’ one-yard line was picked off by Malcolm Butler in the end zone. This marked Tom Brady and Bill Belichick’s fifth Super Bowl win together. 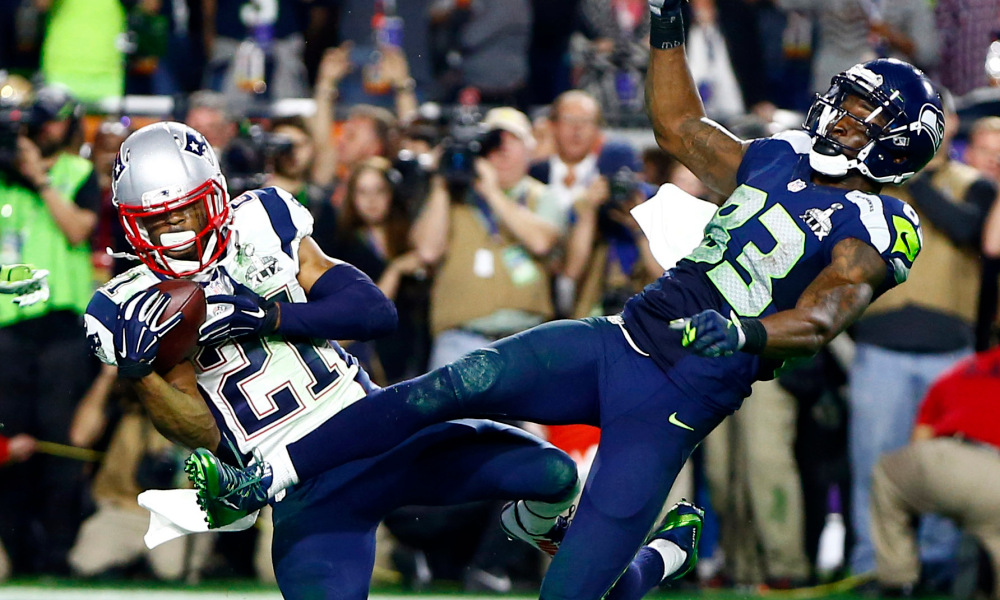 Malcolm Butler’s late-game interception sealed this game in the annals of the thirteen best Super Bowls.

This game featured Jim and John Harbaugh coaching against one another. There was also a power outage and a thrilling San Francisco comeback. The comeback fell short late in the 4th quarter when San Francisco quarterback Colin Kaepernick’s potential TD pass to Michale Crabtree fell incomplete. Forty-niner fans will tell you to this day that there was pass interference on the play. The Ravens held on to win. This was the last game played by Ravens’ greats Ray Lewis and Ed Reed.

This game featured two memorable plays, both by Pittsburgh. As halftime neared, Steelers’ linebacker James Harrison returned an interception 101 yards… aided by more than one illegal block in the back. Then, with just 37 seconds left in the game, Ben Roethlisberger hit a fully-extended Santonio Holmes in the back right corner of the end zone.

There hasn’t been a perfect season in the National Football League since the 1972 Miami Dolphins. The 2007-08 Patriots came so close. Heavy favorites against the Giants, the Pats gave up an improbable late-game reception to wideout David Tyree, who pinned the ball against his helmet. Just a few plays later, the Giants were in the end zone, and the Patriots had to swallow their only loss of the season in the Super Bowl.

“The Greatest Show on Turf.” That’s what they called the high-flying St. Louis Rams’ offense. St. Louis was a heavy favorite, but the Titans proved to be more than worthy. Kevin Dyson’s extended right arm came a yard short of the winning touchdown.

“Wide right.” Those two words ring in Buffalo Bills’ fan’s ears to this day. This was the first of four consecutive Bills’ appearances in the Super Bowl. It was also the one they had the best chance to win. Alas, a 49-yard Scott Norwood field goal went wide right.

Legendary 49ers Head Coach Bill Walsh led his team one last time on this day. At the beginning of the winning drive, Joe Montana interrupted his play call in the huddle to say, “Hey, isn’t that John Candy?” before leading the Niners on a 93-yard TD drive. John Taylor (not John Candy) caught the touchdown pass.

Two weeks after Joe Montana to Dwight Clark became “The Catch,” the San Francisco 49ers captured their first of five rings at the Pontiac Silverdome. Cincinnati made a valiant effort to erase a 20-0 halftime deficit, but destiny was on the side of Bill Walsh’s Niners.

Most of the games we remember are because someone did something great! Other contests are memorable for someone’s failure. Bill Buckner’s error in Game Six of the World Series comes to mind. Unfortunately for veteran Cowboys’ tight end, Jackie Smith, his third-quarter drop of a perfect pass in the end zone proved to be the lasting image in a competitive game.

This was the game that ushered in the merger between the NFL and the AFL. The Jets were 17-point underdogs, but Joe Namath’s famous guarantee turned out to be prescient. We include this game on our list because of its historical importance. The game itself was actually dominated by New York.

Gildshire had to include this one because it started it all. People tend to remember this game as a blowout for the Packers. However, it was anything but a Packers’ runaway in the first half. In fact, Kansas City outgained Green Bay at the intermission and trailed on the scoreboard 14-10. Veteran receiver Max McGee was a man who knew his way around a good time the night before the game. He came off the bench, still hungover, to catch two TD passes from game MVP Bart Starr.