Oh, baby, it’s coming. The warmer late spring days will soon give way to the hot days of summer. The tank tops come out, the shorts come on and it’s summertime! Or, as your friends at Gildshire like to call it, “ice cream season.” Now, don’t misunderstand. Ice cream is well-consumed while we’re wrapped in a blanket on a random January day. But, the lazy, hazy, crazy days of summer are a canvas on which we create ice cream sensations from Baskin-Robbins and Cold Stone Creamery. By themselves, those two ice cream chains can satisfy our yen for frozen cream. Or, can they? Today, Gildshire drops some knowledge on the best independent ice cream shops in the United States. Count yourself fortunate if one of these community gems is near you. If not, there are worse reasons for a roadie than to eat the best ice cream! Let’s go! 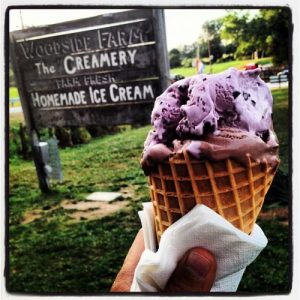 Woodside Farm Creamery, 1310 Little Baltimore Rd, Hockessin, Delaware: This creamery was born in 1998, but the dairy farm from which they draw their source material has been around since 1796! Each batch of cinnamon apple pie ice cream contains an entire apple pie. That boggles the mind. Other favorite flavors include butter brickle (talk about old school) and peppermint. Outdoor seating available.

Velvet Ice Cream, 11324 Mt. Vernon Rd, Utica, Ohio: Finding good food or drink is one of life’s little pleasures. Finding it in an out-of-the-way spot is something to remember always. Such a place is Velvet Ice Cream. Its founder, Joseph Dager, was a Lebanese immigrant who moved to this part of Ohio in 1903. He didn’t speak a word of English and started his ice cream making operation in a basement. Today, his shop is the first job for many local kids and a destination for scores of people from all over Ohio. Favorite flavors include bourbon pecan and Kentucky pecan praline. 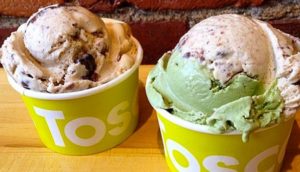 Toscanini’s, 159 1st St, Cambridge, Massachusetts: There are tons of reasons to matriculate at Harvard. The top minds training to do great things on a national and international scale. Or, you can travel across the Charles River bridge and eat the same ice cream the smart kids are eating. You’ll find them at Toscanini’s. Almost 40 years worth of Harvardians has gotten their dessert fix at this establishment. Favorite flavors include burnt caramel and Vienna finger cookie ice cream.

Ted Drewes, 6726 Chippewa St, St. Louis, Missouri: Fifty years before there was a Shake Shack selling “concrete” there was Ted Drewes selling frozen custard and Christmas trees out of the same store. In fact, it was a St. Louis tradition to grab a quart of Ted’s best while picking up the holiday door garland. They don’t sell the trees anymore, but Ted’s is still the home of some of the Midwest’s finest frozen dessert treats. Favorite flavors include twisted caramel and fresh blueberry. 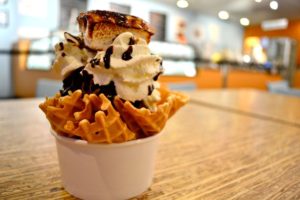 Sweet Republic, 9160 E. Shea Blvd, Scottsdale, Arizona: We’re not doing chain ice cream stores here and Sweet Republic just opened a second store in Phoenix. But, we’re going to let it slide because two is a sister and not a chain. At least, that’s our rationale, because we want to include this favorite in the Valley of the Sun. The folks who run it are crazy-good at using recycled materials. That means you can have your ice cream and your social consciousness too. Favorite flavors include horchata and salted caramel.

Ruby Jewel, 428 SW 12th Ave, Portland, Oregon: Yes, this is an article about ice cream. We know we are free to write another one about cookies. That said, some ice cream places serve delicious treats that simply BEG to be put between cookies.  Ruby Jewel is one of those places. Oregon’s finest locally sourced, hand-crafted ice cream is the way they do business. Favorite flavors include salted honey almond brittle and peanut butter/chocolate.

Quenelle, 2214 W. Magnolia Blvd, Unit A, Burbank, California: The word “quenelle” is French for a fancy French technique for forming ice cream and other foodstuffs into perfect little oblong shapes. Cool, albeit stuffy. Know this, though. There is nothing stuffy about the way this little ice cream store does business. While we’re all about the purist who wants a scoop of ice cream, we also admit a certain curiosity about an ice cream bar dunked in Fruity Pebbles. But, I digress. Favorite flavors include root beer float and merlot. (Okay, merlot ice cream is a little stuffy, but one shouldn’t knock what one has not tried.) 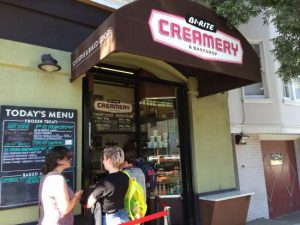 Bi-Rite Creamery, 3692 18th St, San Francisco, California: Since 2006, the Straus family has served up ice cream decadence to the folks who line up around the block to get in. You know this place has to be great because it sits 3.5 miles from Ghiradelli Square and thrives! Favorite flavors include cream cheese carrot cake and honey lavender.