The world’s most dangerous plants: If you ever get lost in the woods, you probably know not to eat any leaves or mushrooms unless you’re 100% sure they’re not poisonous. That’s because Mother Nature loves killing unsuspecting critters, and she’s created a lot of very dangerous plants, like the ones on this list:

Also known as “wolfsbane,” this pretty purple plant is often seen in British gardens. However, don’t let that delicate-looking blossom fool you: in ancient days, people would use crush up the flowers and use the juice to poison arrow tips. It’s powerful enough to kill wolves. Nazis even tried to use it to poison bullets. Today, poisonings are rare, and they usually happen when a gardener or hiker mistake the white roots for something else (like horseradish) and eat it.

If you were to ingest any part of the plant, the toxin known as aconitine would begin circulating through your body. Symptoms start quickly. First, your mouth would begin burning. Then, the vomiting and diarrhea start. If you don’t get medical attention, the poison hits your organs, especially the heart, and it can be fatal in 2-6 hours. Even just touching the plant can cause nasty effects like tingling, numbness, and so on. In 2014, a gardener died after possibly brushing up against the plant without gloves. It took him a few days to die, and there’s still some doubt about what exactly happened, but monkshood was clearly the culprit.

There are four types of hemlock, all of which are poisonous because of the chemical cicutoxin. It’s most abundant in the roots of the plant, which unfortunately looks a lot like a tasty parsnip or celery. One hemlock type, water hemlock is very common in the United States and the United Kingdom. It’s often mistaken for Queen Anne’s lace because of its small white flowers, though Queen Anne’s lace has a tiny red blossom in the center, while water hemlock does not. If you eat water hemlock, symptoms strike almost right away as the cicutoxin targets your central nervous system. The stuff is powerful enough to kill cattle in 15 minutes. Seizures, stomach cramps, and nausea arrive first, and then organ failure and death. If you’re lucky to survive, you might end up with amnesia or tremors. 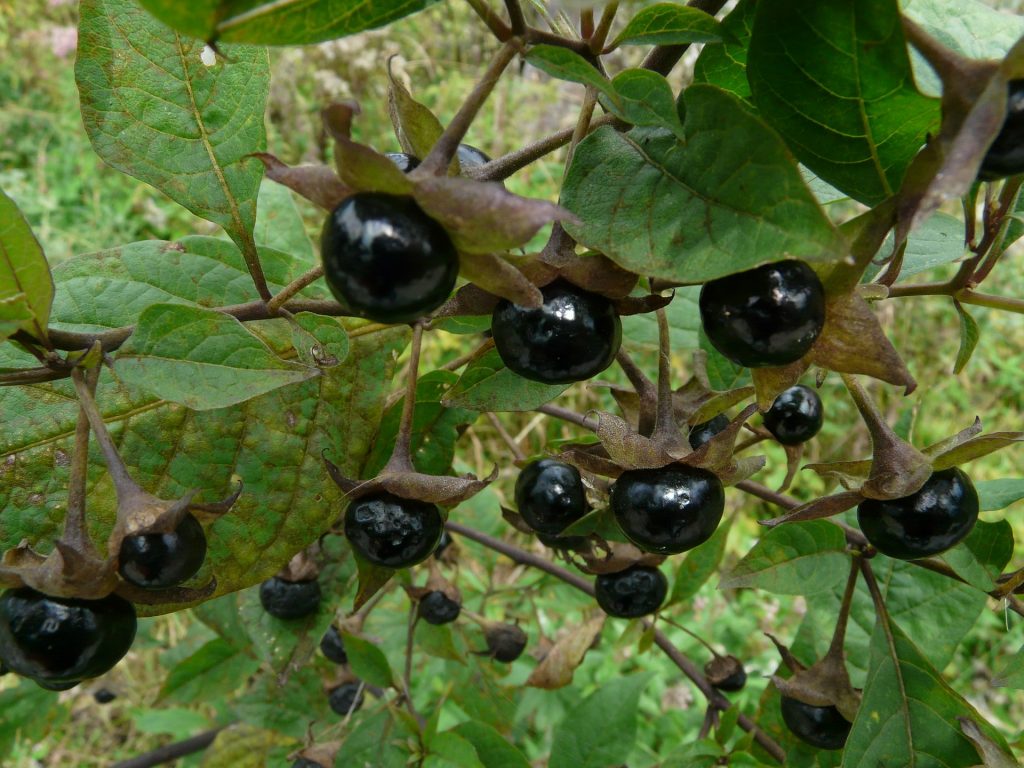 Most Dangerous Plants: The most famous poisonous plant, deadly nightshade (or belladonna) was a favorite for assassinations.

Arguably the most famous poisonous plant, deadly nightshade (or belladonna) was a favorite for assassinations. The plant’s toxic berries have a very sweet taste, so it’s easy to squeeze a bunch into the goblet of a king or other target. In 1030, a Scottish king supposedly gave a drink of belladonna to the army of Danes, killing them quickly. Nightshade is packed with atropine and scopolamine, which is present in the stems, berries, leaves, and roots. Like with monkshood, just touching the leaves without gloves can cause irritation, though not death. Because of the sweet berries, deadly nightshade has killed many children.

Poisoning symptoms include rashes, headaches, dry mouth, confusion, hallucinations, and convulsions. For a child, just two berries are enough to cause death, while adults can eat 10-20 before dying. If you were to eat just one leaf, however, you’re probably doomed.

This perennial plant is famous for causing “milk sickness,” a common fear in the 19th century for travelers to the Midwest. They would let their cattle roam freely, and the beasts would eat the white, fragrant wildflower. However, the cattle’s milk would then be poisonous, and many died from drinking it. Abraham Lincoln’s mother, Nancy Hanks, most likely died from milk sickness in 1818. The poison is even present in a cow’s meat, too. It wasn’t until 1928 that the scientific community finally identified the specific toxin.

That toxin is called tremetol, and it causes vomiting, stomach distress, and trembling. It also makes the blood more acidic, which can be fatal, and it can lead to a coma. Today, tremetol poisoning is very rare, since cows won’t eat white snakeroot if other food is available, and farmers take other precautions.

Pressure Points for a Good Night Sleep and an Alert Tomorrow