If you can’t trust an embattled milk delivery guy, then who can you trust? Tevye, father of three, husband of one, and the star of “Fiddler on the Roof,” said it best. “Tradition…TRADITION!” Indeed, for the last four years it has been a Gildshire tradition to go to the local theater complex on Christmas Day and see three movies.

In that time, we have seen some great films. “Les Miserables,” was a Christmas Day movie, and at midnight to boot. “Manchester By the Sea” was an unexpected favorite, as we anticipated being overwhelmed by “La La Land.” Color us underwhelmed by that one. We have seen the dinosaurs of “Jurassic Park” maraud through the landscape on Christmas Day. We’ve seen a girl share her hard-boiled egg lunch with a river creature and immediately fall into bed with him (what in the world was up with that?) on Christmas Day. Art house favorites to blockbusters, we’ve been everywhere and have seen them all. This is our plan for three movies Christmas Day 2018. 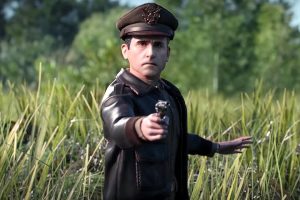 “Welcome to Marwen” is based on a true story, and leads off our three movies.

Steve Carell may be best known as the bumbling boss at Dunder-Mifflin in “The Office,” and burnished his comedy credentials in “Date Night.” But, Carell showed his acting range to good effect in “Foxcatcher,” and has been one of Gildshire’s favorites since then. In “Welcome to Marwen,” he plays a severely damaged man trying to cope with the world in which he lives. We’re looking to start our three movies with one that we think will out-kick its pedestrian Rotten Tomatoes number, which stands currently at twenty-five. That’s not much of a Tomatoes recommendation, but our instincts say we will be entertained. 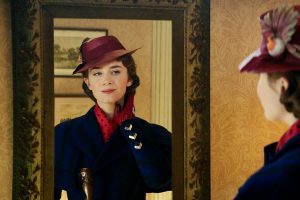 Emily Blunt is Mary in this renewal of the original magic.

We live in a time that isn’t exactly practically perfect in every way. So, perhaps this sequel/reboot comes about at just the right time. Someone once said that Emily Blunt is the best thing in everything she touches, and that is likely the case here. Not just anyone can be Mary, but Emily appears to manage quite nicely. This is an homage to our childhood, but it’s also a peek into the modern world of CGI special effects. That, and the chance to see 94-year-old Dick Van Dyke dance made this one a no-brainer. Rotten Tomatoes is somewhere between cautiously optimistic and enthusiastic with an aggregate score of “75.” We’ll go to the concession stand for a spoonful of sugar and enjoy the second movie of our Christmas Day extravaganza. Two of three movies down, but what will we choose to anchor the evening? 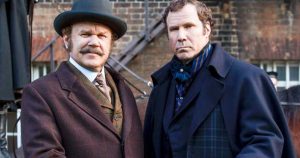 John C. Reilly and Will Farrell complete the three movies we will see on Christmas Day.

You expected something a little more highbrow? Sorry to disappoint, but Will Ferrell and John C. Reilly combined to make “Talladega Nights: The Legend of Ricky Bobby,” and that is all we needed to know. We’re in the mood to laugh, especially after the heavy dish that “Welcome to Marwen” looks to be. In “Holmes,” the two funnymen send up the Arthur Conan Doyle canon to great effect. It doesn’t have a Rotten Tomatoes score yet, and when it does the score will not be great. Will Ferrell isn’t for everyone and the critics who make up the R.T. team are not big fans. However, Gildshire is big into his movies and is happy to make this movie the third on our list.

That’s our plan for three movies to see on Christmas Day 2018. We certainly considered “Bumblebee,” and gave brief thought to “Aquaman,” but decided to be true to our preference for the Marvel Cinematic Universe and skip those. The superhero movie powers that be in the office finds DC movies to be a bit dour and humorless. Who are we to argue with the people who know? Have a great Holiday, no matter how many movies you plan to see. Just know that the cool kids are seeing three. No pressure but… We’ll be back next week with another regularly scheduled Gildshire Goes to the Movies.