Home » Healthy Lifestyle » When The Tomato Made Witches Fly

The humble tomato is one of the most popular vegetables/fruits in the world. Without it, spaghetti and pizza would be very different. However, tomatoes weren’t always so popular. In fact, Europeans used to believe the tomato was evil.

Tomatoes grew in Central and South America, so for thousands of years, Europeans weren’t familiar with them. When the Spanish arrived in the 16th century, they found what the Aztecs called a “tomatl,” which means “golden apple.” The tomato had a yellow color back then, not bright red. Spanish traders brought back the tomato, but not for eating. Lots of doctors and scientists said the tomatoes were poisonous, and should only be grown for their beauty. 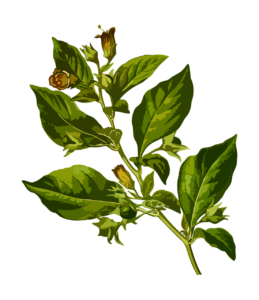 Deadly nightshade – do not eat

Why? The tomato is a member of the nightshade family, which includes deadly nightshade, also known as belladonna. This plant has pretty dark berries that disguise toxic effects like hallucinations and delirium. The leaves of the tomato plant and deadly nightshade are similar, so Europeans were being cautious. They were just as skeptical about eggplants; in the 13th century, Italian folklore warned that eating them could cause insanity.

In 1545, the tomato’s reputation took another hit when the pope’s physician released the official ingredient list for “witch cream.” Europe was in a frenzy about witches during the 14th through 17th-century, and executed hundreds of thousands of “witches,” most of them women. In order to make their broomsticks fly, witches supposedly made a witch cream of hemlock, nightshade, henbane, and mandrake. They would also use their concoction to transform into werewolves, so they could more easily attack children and stalk forests at night.

The tomato has a lot of similarities to nightshade and mandrake, so most people associated the presence of a tomato with witchcraft and werewolves. In scientific books, the tomato was even classified as a type of mandrake, which would not have encouraged people to eat them. In German, an old name for tomatoes actually translated to “wolf peach.” 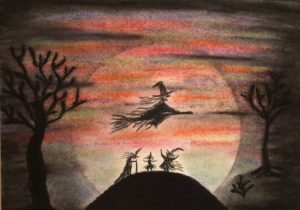 Even though witch’s cream used mandrake, people still steered clear of the tomato

When the American colonies were established, the first reference of the tomato dates back to 1710. The plant was being grown in North and South Carolina, where people were eating tomatoes regularly, but old beliefs persisted. There’s a famous story – probably a legend – about a colonel who grew tired of people’s fear about the tomato. In 1820, he took a basket of tomatoes and stood in the main square of Salem, New Jersey. He declared he was going to eat the whole basket and would not die. 2,000 people gathered, expecting a grisly spectacle. The colonel ate all the tomatoes, and of course, did not die. Tomatoes supposedly became more common dinner fare after that.

By 1822, newspapers were printing hundreds of recipes that included tomatoes. Farmers began growing them in large quantities, and old fears subsided. Nowadays, we know there’s a huge difference between tomatoes and the deadlier members of the nightshade family, which also includes tomatoes, eggplants, and bell peppers. Tomatoes have been shown to have lots of health benefits, including an abundance of vitamin A, C, B6, and folate. Some people do have a sensitivity or even intolerance to tomato and other nightshades, so watch for symptoms like stomach distress, bloating, and headaches. Scientists believe issues with nightshade vegetables might be genetic.

Why do grocery store tomatoes taste so much blander than homegrown or heirloom tomatoes? Find out here.