A legume with a fragrance reminiscent of almond and cherries and a flavor people compare to a complex vanilla, the tonka bean has been used for centuries in South American cuisine. It’s mostly produced in Nigeria and Venezuela, where the fruit (which has just one bean) is picked from trees. The beans are then dried and because their flavor is so strong, they’re grated into tiny flakes, which are used in syrups and desserts with (or instead of) vanilla. Despite their deliciousness, tonka beans are banned in America. Why?

In 1820, a British chemist figured out how to isolate what gave tonka bean its fragrance and taste: coumarin. It’s found in lavender, grass, and cherries. Scientists then developed a way to artificially create coumarin, so it ended up in chocolate, cocktail bitters, vanilla, sodas, tobacco, and perfume. The tonka bean’s rise in the food world came to an abrupt stop, however, in 1954. The FDA announced added coumarin or tonka extract were banned.

The reason? A series of studies on animals revealed something troubling: coumarin was bad for the liver, and in just a few weeks, even low levels caused significant damage. In sheep, just two teaspoons was deadly. That sounds scary, and tonka beans do contain high levels of this chemical, but cassia cinnamon actually has 25,000 times more. It isn’t banned or even regulated in the US, though the European Union limits the daily limit of cassia cinnamon to under 1 teaspoon.

The ban hasn’t stopped the United States from enjoying tonka beans. The country actually manages to the world’s biggest importer of the spice, thanks to smugglers used by top chefs, and good ol’ Amazon. You can buy a 1.8-ounce bag of “Dona Maria Gourmet finest dried haba tonka beans” for $21.99 and try out the illegal spice for yourself. 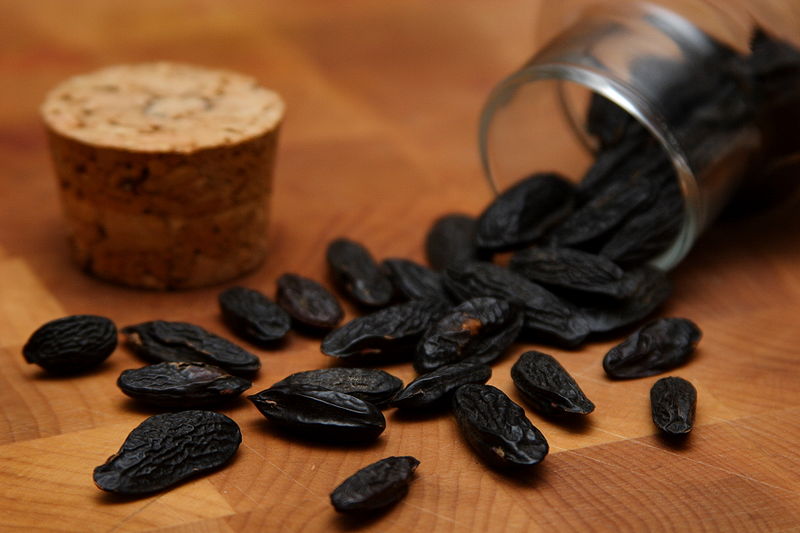 Put milk and salt into a medium-sized pot. Grate the tonka bean with a Microplane into the pot and heat the mixture on medium until steaming; be sure it isn’t boiling. Turn the heat to low to maintain the heat for 15 minutes to infuse the tonka bean flavor.

In another bowl, whisk egg yolks and sugar. Add a little of the milk mixture into the yolks and stir well; add slowly and do use only a little, or else the heat cooks the eggs. This is called tempering. When you’ve whisked in a little of the milk and tempered the eggs, slowly add the eggs into the milk pot, stirring the whole time. Put the pot back on stove, this time on medium-low, and keep stirring until thickened. Remove from the heat and stir in heavy cream and vanilla. You’ve now got a custard!

Strain custard through a fine mesh sieve into a clean bowl. Put in the fridge, stirring every 10 minutes, for an half hour or until the custard is fully-cooled. When cool, cover with plastic wrap and leave in the fridge overnight.

Get out your ice cream maker and follow the usual steps for making ice cream. When frozen and ready to eat, enjoy plain to really get a sense of the tonka bean flavor.

The tonka bean is often considered more complex than vanilla, but vanilla itself has a fascinating history and will most likely always be the world’s most popular spice.

Super Bowl History, and How it Came to Be