Psychopaths are not some aliens or movie characters. They are our co-workers and neighbors. We think we might be able to recognize psychopaths right away but think again. In real life, the workforce is full of psychopaths, especially for certain job occupations. Here is the list of the top jobs for psychopaths, the jobs that experts believe psychopaths find to be the most appealing job opportunities.

The list comes from Kevin Dutton’s “The Wisdom of Psychopaths” who has an open mind when it comes to psychopaths. The list was created not as a warning to non-psychopaths but as a recommendation for psychopaths. As Joshua Buckhotz put it:

The following occupations are the top jobs for psychopaths. Are you ready? Here we go: civil servant, chef, clergy, police officer, journalist, surgeon, salesperson, media personality, lawyer and CEO. As you can notice most of these occupations are occupations of power. 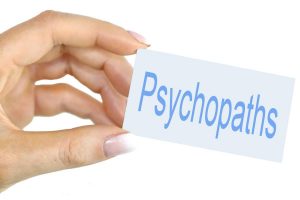 It came as a surprise when the official UK’s Home Office suggested that the government should recruit psychopaths due to their high ability to stay cool in all emergencies. If a job requires any type of emotional detachment, psychopaths are perfect candidates.

The professions of power are also media personalities, CEOs and lawyers. Narcissism and psychopathy go hand in hand. If a psychopath is in front of as many eyes as possible, he would be drawn to those positions.

Being a lawyer is not only deciding matters of life and death (sometimes literally) but it also gives a psychopath more space to manipulate others. CEOs can be masters of manipulation; they can be those creating chaos while staying cool. Therefore, CEOs have a strong tendency to become good corporate leaders.

Also, sales is a competitive field where one can go towards promotion if they are persistent enough which they tend to be.

It’s hard to see psychopaths in our work environment and if you think you recognized one, you might be wrong. Remember, they are masters of manipulation.

It’s important to note that successful psychopaths have a high level of conscientiousness which doesn’t necessarily mean that they care about other people, or what others think, they are just more aware of others and what they think about them, but at the end of the day, they don’t care. They might use that information to be ready to manipulate anyone.

How to avoid being manipulated by psychopaths at the workplace? Keep calm and stay confident and you will not be a target for manipulation.

The Coronavirus and Your Portfolio: Gildshire’s Take