The hunt for the 2018 NCAA Football Championship kicks off on Thursday August 30th as teams turn their sights on a chance to make the NCAA playoffs. The big question everyone around the country is asking themselves leading up to the season is can any other team than the Alabama Crimson Tide take home the title.

For now, that question will be left undecided as the Crimson Tide currently sits ranked number one in the country in both the AP Top 25 and Coaches Top 25 polls. Another team that will be fighting to take home the National Championship is the Clemson Tigers who currently sit just behind the Crimson Tide in both polls.

As we get set for the exciting 2018 NCAA Football Season, here is a quick look at five of the top matchups of the upcoming schedule.

All eyes will be on this key Top 25 matchup in week one as both the Huskies and Tigers need a win to keep their hopes of a playoff trip at the end of the season. For the Tigers they will have a difficult task to open up the year as they look to slow down future NFL draft pick Jake Browning. Browning who elected to return for his senior season is just a few years away from throwing for 3,430 yards and 43 touchdown passes. 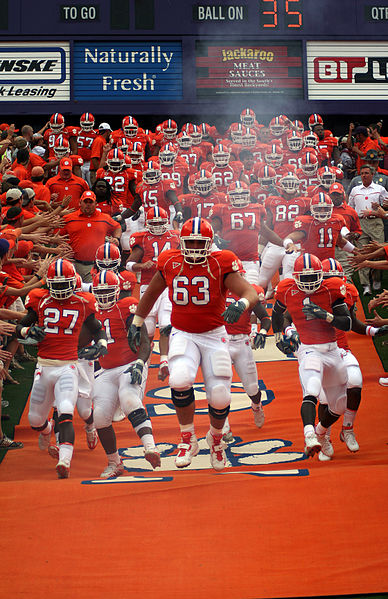 The same storyline continues to play down at the end of NCAA season as the Tigers make another run at a trip to the NCAA Playoffs and a spot to take home their second National Championship over the past few seasons. For the Tigers their success will fall on Kelly Bryant who will look to repeat the success that we all saw from DeShaun Watson just two seasons ago. The dual threat quarterback threw for 13 touchdowns while adding 11 more on the ground. For the Tigers to win this season though, Bryant needs to reduce the eight interceptions. On the other side of the ball the Seminoles success this season may come from how successful Willie Taggert can be leading the program in his first season as head coach.

Entering the 2018 NCAA Football Season as fans and experts we can all look at this matchup as one that could go a long way to determining who might not only be playing for the SEC title but a chance to make the playoffs. For the Crimson Tide their success up to this point of the season will rely on the success under center with either quarterback Jalen Hurts or Tua Tagovailoa. Meanwhile for the Tigers they may be the dark horse in the SEC to compete with the Crimson Tide.

All in all the 2018 NCAA Football Season looks to be action packed from a solid week 1 slate to the final few games of the regular season.