Most of the automotive world decried President Trump’s plan to undercut California’s stringent gas mileage rules with his own nationwide mileage rule. One car company, though, loudly defended the President’s plan. Toyota USA spoke into the wind this week when it came out in favor of mileage standards in California a full 12 mpg less than they currently lie. When Toyota surprises industry leaders to this extent, Gildshire takes notice. Car and Driver helped with the research.

How did that go over?

The reaction of the Twitterverse to Toyota’s surprising stance was swift and nearly unanimous. Toyota is known as one of the more environmental friendly carmakers in the world, which is part of why this position surprises many. But, the ubiquitous social media site led by the blue bird wasn’t the only entity to register surprise and, in this case, retaliate. The State of California pledged to take steps toward a full ban on the purchase of government vehicles from Toyota.

In fuel economy news of the opposite kind, earlier this year, BMW, Honda, Ford, and VW made deals with the State of California to continue support of the higher-mpg results the state desired. The deals weren’t the same as the Obama-era rules. But they were close, as the carmakers and the state agreed on getting to 50 mpg in the next six years. Stark contrast, to be sure, compared to the harder stance by Toyota USA. Obviously, the carmakers in agreement with California hope to gain goodwill, and sales, from car buyers interested in a cleaner, greener planet.

I do find this troubling, but what does Toyota have to say in defense of the stance? I want to hear from them.

Indeed you should. Here is Toyota’s position in their own words.

“Without joining this legal action, we would have no ability to affect the outcome. We do not believe that there should be different fuel economy standards in different states. There should be one standard for all Americans and all auto companies. That is why we decided to be part of this legal matter. Doing so does not diminish our commitment to the environment, nor does it lower our desire to manufacture vehicles that produce fewer emissions year-after-year.”

“What legal action are they joining?”

Oh, this is going to court and perhaps the highest court in the land before it is over. Even now, there are lawsuits from the federal government challenging California’s right to establish its own mileage guidelines.

“That’s the one that Toyota is joining.”

Yes, but meanwhile, lawsuits are underway to stop the feds. California claims to be in a unique situation.

“You mean because you can sometimes cut the air in the L.A. basin.” 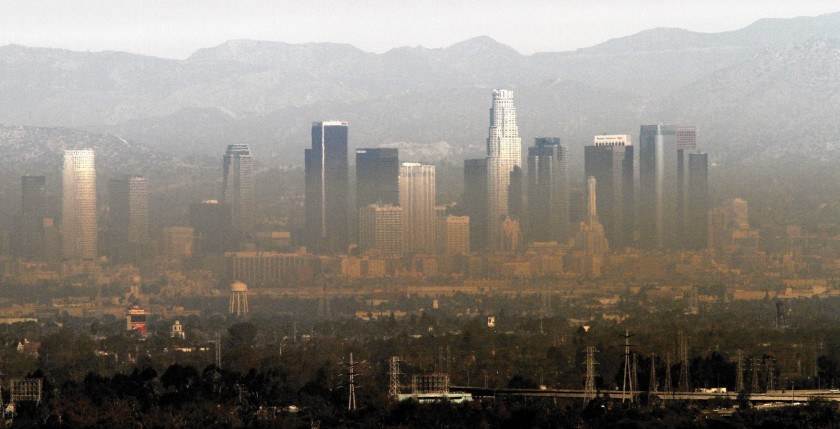 Toyota surprises industry by pushing back on mileage standards, even as the sky in L.A. can look like this.

Not only there, but also in virtually every region of the state. To be sure, other states suffer from exhaust-created pollution. If you are ever in Chicago on a still summer day, you’ll know what I mean. But, California is the star on the flag with the highest concentration of pollutants, statewide.

It is one of a small minority. Ferrari, GM, Fiat Chrysler, Kia, Hyundai, Mazda, Nissan, Mitsubishi, and Subaru have sided with the President.

“General Motors? But, Toyota is taking the heat.”

Not all of it. There is a #GMTrump hashtag that has been getting some run. But when Toyota surprises industry people with a move such as this one, it makes the news.