Home » Our World » Toyota to Increase its Manufacturing in Mexico

In a week of mixed, but mostly positive economic news for the Administration, Toyota threw a wrench in the happy talk. The carmaker announced earlier this week that it will increase manufacturing in Mexico to 100,000 vehicles per year by 2021. This is a new marker in Toyota’s production shift of the Tacoma pickup from the U.S. to Mexico. Reuters helped with the research, as Gildshire dug in to find out more.

The plant is located in Guanajuato. It, and another facility nearer the U.S. border, brings Toyota’s Mexican production up to 266,000 trucks per year.

Toyota expects to ship 95% of the pickups from the two manufacturing plants to the U.S.

What Toyota is saying

“Tacoma production will be concentrated in Mexico,” Christopher Reynolds, an administrative officer for Toyota in North America, said at an event to inaugurate the new Guanajuato plant. “What this means is that the Mexican manufacturing facilities of Toyota will build all the Tacomas that serve the mid-size pickup segment in the North American market.”

Asked about President Trump, Luis Lozano, head of institutional relations for Toyota Mexico, said, “We don’t make business decisions based on politics. We are a company that thinks about the very long term and that we’re going to be here long after many people have gone.” 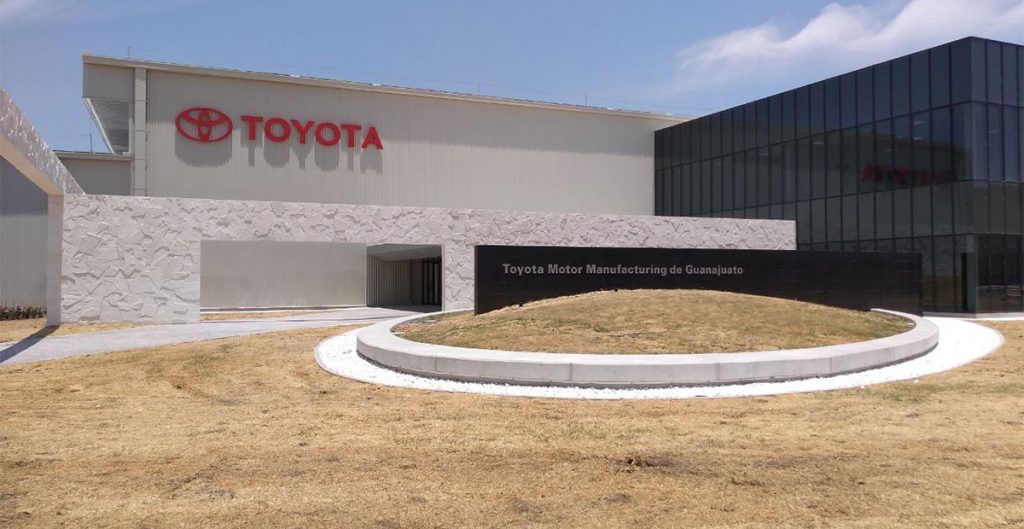 Toyota manufacturing in Mexico will increase as production ramps up in this Guanajuato plant.

Lozano went on to note that Toyota maintains a large production footprint, and that 30,000+ workers are in its U.S. operations. Toyota invested $700 million into the Guanajuato manufacturing site, which began operations in December of 2019. Toyota first began making Tacoma trucks 17 years ago in Mexico’s northern border city of Tecate. Last year that plant turned out almost 167,000 pickups.

Last year, automotive exports from manufacturing in Mexico fell for the first time in a decade. That number was due, in part, by weak demand from outside the United States. Industry prognosticators expect another drop in this year.

The impact of the new trade agreement

Lozano said his company will not make many supply changes on the heels of the new regional U.S.-Mexico-Canada trade accord. It replaced the North American Free Trade Agreement that Trump has long criticized.

The new accord requires increased North American content in vehicles built in the West. This, along with new mandates to use North American steel and aluminum. Also, 40-45% of a truck’s (or car’s) worth must come from areas paying workers at least $16 an hour.. Manufacturers who fail to meet the new standard will be subject to the U.S. tariffs.

“We don’t have to make large adjustments within our value chain in North America, because for a long time we have had a value chain which is very deep, very sophisticated and very integrated,” Lozano said.

“It is not an issue that will require greater efforts or investments to comply. We will fulfill it to the letter.”

How it will land on the Presidential campaign

As the U.S. Presidential race clicks into high gear this year, Toyota’s decision about manufacturing in Mexico is sure to raise eyebrows among the Democrats in the field. Car building facilities in the upper midwest have stubbornly stayed closed in spite of President Trump’s insistence that things are improving every day. The next move is the Administration’s. Will they make one? Gildshire will watch the action along with you.