Most individuals can point to certain dishes as staples of different countries. Italian may bring to mind pizza and pasta, while bratwurst may conjure images of German cuisine. However, American food is a bit harder to pinpoint. While the all-American apple pie or a cook-out filled with burgers and hot dogs may come to mind. Can other truly American dishes be named and described?

The United States is truly a cultural melting pot for all types of people. But this does not mean that traditional American dishes do not exist. In fact, we found three American dishes that will have you running for your family table to reminisce about the fond memories brought on by these comfort foods. 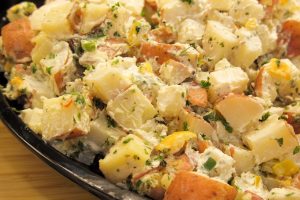 Though potato salad itself may not have originated in America, the American version is both creamy and has bacon. Remember, bacon makes everything better! So grab some new red potatoes, mayonnaise, sour cream, vinegar, celery, a few spices to taste, and of course bacon, to create a dish that will take you back to the picnics of your childhood. Cook the potatoes and fry the bacon until crispy. For this version, mix ½ cup of mayo, ¼ cup of sour cream, 3 t. of vinegar, and salt and pepper to taste. Follow-up with the potatoes and celery while tossing to coat. If desired add tarragon and parsley to taste and fold in bacon before serving. Enjoy this easy to make the dish at all your family gatherings.

Also reminiscent of picnics in the park is the traditional dish of baked beans. Offer some extra flavor by adding 1/3 cup molasses, 1 t. of dry mustard, 1/3 apple cider vinegar, and ½ cup of dark brown sugar. In addition, adding onions and a bit of ground pepper compliment the pork or bacon slab socked right along with the beans. There goes bacon again, we are Americans after all.

The final recipe shared today will go great with the baked beans or as a stand-alone midnight snack. Cornbread is a dish that was present at many a Sunday supper for those who grew up a few years ago. This Rosemary version uses corn-bread mix, 2 eggs, 1 container of plain yogurt, 1 can of whole kernel corn (drained), and a tablespoon of rosemary leaves for flavor. Bake at 400 for 25 minutes or until golden brown before serving. Does this sound like the traditional cornbread at your table?

No matter what comes to mind when mentioning American cuisine, it is the feelings of family and home that make them special. Create a new tradition for your family today.

Celebrating Independence Day in the Midst of a Pandemic

Get Ready for the Best 4th of July Barbecue Ever

The Life of a Perfectionist – How to...

Everything you Need to Know about CBD oil...

The Reason Why People Avoid Dentists? It’s Not...