There are so many traditions surrounding holidays. Christmas has many, one of them being hanging stockings that get filled with small gifts on Christmas Eve. Like many traditions, the history of Christmas stockings is uncertain and also mind-boggling. Who would have thought to hang socks up on a fireplace and put gifts inside? Similar to the confusion when considering why someone thought it would be a good idea to cut down a tree and put it in their house to decorate? But that is a whole other tradition. In terms of Christmas stockings, there are two main theories as to how it began.

The Story of a Man and His Three Daughters

Firstly, the story of A Man and his Three Daughters: There was an old, widowed man who had three daughters. They were poor and the man worried about the future of his daughter; even though they were quite beautiful, he had nothing to give for their dowries and their impoverished status was an obstacle. St. Nicholas, a 4th-century bishop from modern-day Turkey, heard about this and wanted to help the man. His parents had left him with a small fortune and St. Nicholas wanted to do good with it so he often made anonymous gifts. One night while the family was asleep, St. Nicholas snuck inside their home via the chimney and placed a bag of gold in each of the three freshly washed stockings that hung above the fireplace to dry. Naturally, when the family woke up the next morning they were awestruck to find the gold and the girls were happily able to get married. 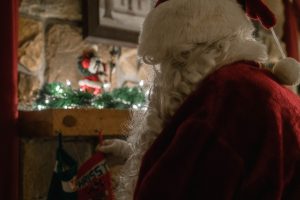 The origins of the Christmas stockings are many and sparse, but regardless of its history, it is a popular Christmas practice worldwide to hang stockings above the fireplace.

The history of Christmas stockings is said to have inspired children to hang their own stockings up on the fireplace in hopes that St. Nicholas would visit them and give them gifts, too. Oranges became a common gift as a way to represent the gold that St. Nicholas gave to the three daughters.

The Norse Legend of Odin and Yule

Secondly, the Norse legend of Odin and Yule: the god Odin rode an eight-legged flying horse, Sleipnir, with whom he lead the Wild Hunt that took place during Yule. As a holy time, Yule lasted from December 21st, the winter solstice, until the end of the month. On the eve of this night, children put carrots, straw, and/or sugar into their boots as food for Sleipnir as he rode across the sky. To repay their gratitude, Odin would replace the food in their boots with treats for the children. Because of the older origins of putting gifts in shoes, it is plausible that the stockings evolved from the shoes as it was typically wooden shoes that were used, but those became less common. Socks have never ceased being used, except to become decorated and festive!

The Story of “A Visit From St. Nicholas

In the famous poem, “A Visit from St. Nicholas,” which might be more commonly known as “‘Twas the night before Christmas,” Christmas stockings are mentioned. Written in 1823, it makes sense to conclude that stockings had already been well-established as a Christmas tradition. The author (which is a controversial topic) ended the poem with “fill’d all the stockings; then turn’d with a jerk,/And laying his finger aside of his nose/And giving a nod, up the chimney he rose.” Whether it was Clement Clarke Moore or Henry Livingston Jr., stockings were present enough in most households to include in this poem for all to read.

Whether St. Nicholas, Odin, or someone entirely different, the history of Christmas stockings became more than just socks hung above the mantle. In countries all over the world, families hang up specially designed stockings that represent the holiday in their home with hopes that they will be filled with gifts and treats.