Home » Our World » Triumph Motorcycle Sales Booming in a Down Market

The year coming to a close has been anything but a year of wine and roses for the motorcycle industry. As reported by Gildshire and elsewhere, doom follows gloom. Harley, Honda, and Kawasaki are all suffering from a dearth of sales. Millennials are turning up their noses at loud two-wheelers. Gen X interest seems to be waning. It appears that the gray-headed ponytail is the target market. Yet, in spite of the news of the day, one motorcycle nameplate flourishes. A Triumph motorcycle was under more Christmas trees than ever before. In fact, The Drive reports that Triumph is bullish on continued growth. Will they become a dominant force? Let’s find out. 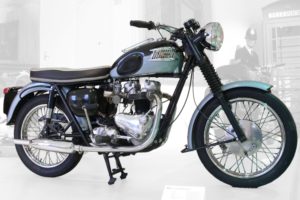 A new Triumph motorcycle was likely under a tree near you.

In 2017, Triumph’s worldwide revenue grew by nearly $122 million to close to $667 million. Motorcycle retail sales grew by 7,151 units to 63,404 units during the financial year. However, the good news doesn’t end with raw, cold numbers. The reach of the iconic Triumph motorcycle is expanding, as well. Their percentage of overseas sales increased from 85.3% to 86.1%. That’s not a massive jump, but it represents Triumph’s growth as an international brand despite having a strong British identity.

Popular new brands are part of the Triumph motorcycle story as we head into the New Year. In fact, five new brands are on the street in this year alone. The new Street Triple, the new Bobber Black, the new (and anachronistically named) Speedmaster, and the new Tiger 800 and Tiger 1200 adventure motorcycles are all receiving high praise from buyers and the motorcycling press.

Though the most startling (from a financial bottom-line standpoint) brand to be flourishing in these down times, a Triumph motorcycle isn’t the only bike you may see in neighbor’s driveway this January.  BMW Motorrad, Royal Enfield, and Indian Motorcycles are doing very well too. What do these companies have in common? They are rethinking the old way of selling bikes. They have new-rider programs and incentives. Perhaps most of all, they are pushing the design envelope.

It’s not just strong products driving Triumph’s growth, but the experience it delivers to its riders and anyone enthusiastic about the brand. That’s also true about all of the other currently successful motorcycle makes. Interesting concept, building affordable bikes that people like to ride. We hope it catches on.

The Patient Art of Stop-Motion Film