There are lots of options when it comes to calling for a ride. Just look at the photo above. But, one name reigns supreme. “I’ll call an Uber.” Those words are music to the ears of the ride-share leader. Not just because it means more change in the piggy bank. Rather, because it is one more example of how the word “uber” has become a part of our daily lexicon. Uber’s rise to prominence in the spoken word rivals that of “Kleenex” for “tissue” and “Jell-O” for a gelatin dessert. In other words, brand names that are synonymous with an entire class of item. Yes, Uber is doing fine, in spite of the fact that the ride-share pioneer has had a bad year from a public relations standpoint. Labor issues and complaints about poor service have dogged Uber’s last 12 months. Yet, it continues on as the undisputed champion.

However, there are clouds on the horizon. One cloud comes from a known source. Established ride-share company Lyft announced it has moved from 18% of the ride-share market to 25% in just two months. That’s an increase that Uber notices in their rear-view mirror. Beyond Lyft, though, there are no fewer than four new ride-share entities taking aim at Uber’s dominant position.

DiDi and Grab are two of them. What do we know about them?

DiDi is an Asian ride sharing rock star, providing transportation services for more than 450 million users across over 400 cities in China. Just this month, the company announced an English-language version meant to compete in the American market. 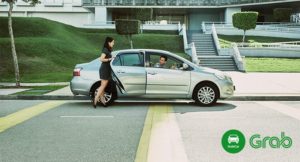 Grab aims to be serious competition for Uber’s crown.

Grab was formerly known as GrabTaxi. It’s a Singapore-based technology company that offers ride-hailing, ride sharing and logistics services in Singapore and neighboring Southeast Asian nations  Malaysia, Vietnam, Singapore, The Philippines, Myanmar, Cambodia, and Malaysia. Why should Uber worry about a company that does business solely in Southeast Asia?

Quietly, Grab just opened an office in Seattle. That’s close enough to Uber’s San Francisco headquarters that their Board of Directors has sweat on their collective upper lips.

Will Uber weather the storm? The guess here at Gildshire is that they will. But, a little healthy competition is good for consumers, and competition is what Uber is about to receive. After all, objects in the rear-view mirror may, indeed, be closer than they appear.

Is a Sandwich Your Next Big Investment Strategy?