“Get your heart beatin’ like a Cadillac, going into overdrive! Bang, bang, there goes your heart…”

Those are the lyrics that are stuck in your head after watching the ad where the pretty girl is transformed into a beautiful girl by fairy dust and apparently the fact that she is driving a Caddy. It is a catchy tune, and an ad campaign that has paid dividends to a brand once considered the maker of stodgy “grandma cars” that couldn’t stand next to a Beemer without genuflecting. Maybe Cadillac’s late resurgence is the result of ad campaigns updating the image. Or, perhaps Cadillac’s resurgence stems from other car companies (cough, Ford, cough) turning their backs on the passenger car market. 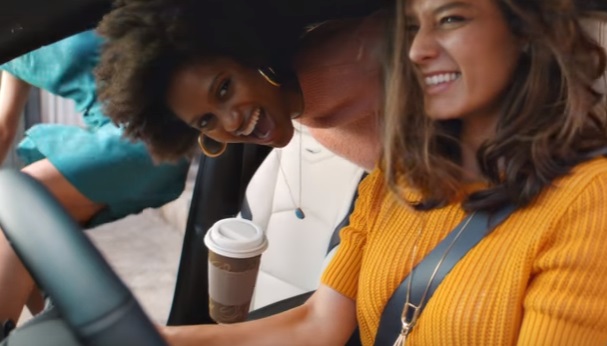 Just before the Cadillac CT4 transforms her.

Either way, Cadillac is surging, partly because they’re still building cars for people who would rather drive a sedan than a two-ton SUV. The new Cadillac CT4 is the carmaker’s replacement for much-loved ATS compact sedan. Unlike in the case of most car models, Cadillac is reversing the usual rollout. Gildshire wanted to learn more, and we enlisted Roadshow’s help with the research.

What do we mean by that?

Typically, a new model debut is in standard garb, with a performance model arriving later. For their CT4, Cadillac jumped right to the good stuff (life is unsure, so eat dessert first) with its hot CT4-V. The more pedestrian standard CT4 will make its debut in about a month.

The big news comes not from the outside shell, but rather from the powerplant beneath the Cadillac CT4’s hood. The engine is a 2.7-liter turbo four-cylinder that produces an estimated 321 horses and 369 pound-feet of torque, though Cadillac admits those numbers are pending SAE certification. The new CT4-V is also rumored to be a road course handler due to its performance chassis and a nearly 50/50 weight distribution.

Power goes to the rear wheels or all four, in all-wheel-drive mode, through a new 10-speed automatic transmission. (Remember when four on the floor was considered cutting edge?) Rear wheel drive versions get Cadillac’s Magnetic Ride Control version 4.0 with a limited-slip differential. All-wheel-drive versions have ZF MVS passive dampers. Regardless, all CT4-Vs come equipped with Brembo brakes that have 12.6-inch rotors up front. All trims come with Cadillac’s VCM (Vehicle Control Mode) with a customizable V-Mode to dial in your driving preferences.

The CT4-V shares much of its appearance notes with the larger Cadillac CT-5. We do know that the V model will get GM’s hands-free Super Cruise system. That’s interesting as General Motors previously showed reluctance to put too many driver-assist components on a performance vehicle.

Is the Cadillac CT4 for you?

Does the idea of a performance-based, glue to the road, Cadillac set your heart aflutter? Have you always wanted to see a Cadillac in your driveway? Does Cadillac’s staunch support of actual cars, as opposed to one cookie-cutter SUV after another make you want to support the brand? If any of these are true, or if the catchy tune on the ads draws you inexorably to the showroom, the Cadillac CT4-V might just be the ride for you.