The 2022 US Open tennis tournament is in full swing and setting all-time record attendance. New Yorkers and visitors are hungry to see tennis in person and flock to the USTA Billie Jean National Tennis Center in huge numbers. And players are providing them with great tennis.

The big story is that all who reached quarterfinals are never won US Open Grand Slam.

Let’s start with the women’s draw. Two American women Jessica Pegula and Coco Gauff showed great potential and entertained the crowd despite their losses. Coco Gauff is still a teenager and we certainly will see her more and expect to win this tournament. Jessica Pegula was plagued by injuries but showed that she has recovered and produced great tennis against Iga Swiatek of Poland.

On Thursday late evening under the lights Iga Swiatek will play against Alyna Sabalenka and Caroline Garcia of France against Ons Jabeur of Tunisia. 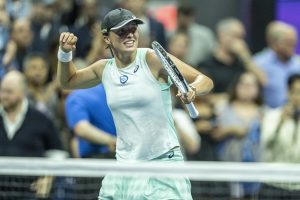 On the men’s side we witness a full change of guards. As Novak Dojokovic has been barred from entering the USA and Roger Federer is not playing at all, it left Rafael Nadal of the Great Three and Frances Tiafoe produced so far the best tennis of his career by biting Nadal in the quarterfinal and moving to the semis for the first time. Also, we have all young generation players who won their quarterfinal matches and will be playing in semis: Casper Ruud of Norway, Carlos Alcaraz of Spain and Karen Khachanov. Alcaraz became the youngest player to reach semis since Chang and is viewed by many as successor to great Spanish player Nadal.

But the big story is an unbelievable play by Frances Tiafoe of the USA. And he is the first American to reach semis at US Open since Andy Roddick achieved that in 2006. Roddick won the US Open in 2003 and was the last American who did that. The match between Tiafoe and Alcaraz on Friday will certainly be a blockbuster and we are all waiting for the great play.