US Open 2022 became a very successful for the USTA, with record crowd in attendance and much anticipated coverage from the press all around the world. Covid pandemic made a wrench on many events and finally people were able to see what they love – great tennis from great player all over the world.

First on women’s side two emerged as winners and most experts were expected to see in the final Iga Swiatek from Poland and Ons Jabeur from Tunisia. Iga already won Rolland Garros and Ons were the finalist at Wimbledon.

For Jabeur it was more of the same when she won her semifinal against Caroline Garcia of France in just over an hour, previously winning two more encounters with her. However, Iga was worked hard to win from one set down against Arena Sabalenka in over two hours match. 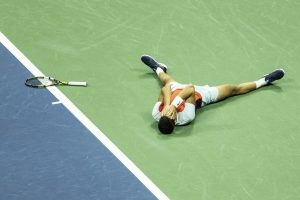 On the men’s part crowd flocked first and foremost for the night match between Carlos Alcaraz of Spain and Frances Tiafoe of USA. Among the crowd to support Tiafoe was the Former First Lady Michelle Obama.

The first semis featured Karen Khachanov and Casper Ruud of Norway. Ruud won in 4 sets in 3 hours, and it could be even quicker if he did not wobble in the first set tiebreak.

Alcaraz and Tiafoe battle each other for more than 4 hours and Carlos was eventual winner in 5 electrifying sets. Crowd witnessed great tennis from both players and any of them could emerge as a winner. Both players produced unbelievable tennis energies spectators who cheers them with standing ovations on many points.

By winning the match Carlos Alcaraz is expected to rise to the number one in ATP ranking on Monday September 12, 2022. By winning the trophy Alcaraz could be the youngest player to win Grand Slam since Nadal did it at Roland Garros.