Few countries are currently so close to failure as Venezuela, with oppression and economic mishandling putting the population under one of the worst strains possible. Although Venezuela is not officially a communist dictatorship, the political scene drifted dangerously in that direction, forcing an unpleasant recollection of what happened to similar regimes in Eastern Europe and elsewhere in the world.

The end of WW2 left a Europe divided in two by the ideologies imposed by the victors. Seven decades later, it is obvious that Communism is an unnatural political ideology with no chances of surviving, an experiment that left societies with wounds painful even today. What makes Communism and Socialism especially harmful is its manner of imposing itself, by mimicking the consent of the majority, torching societies and raising impostor elites from the ashes, suppressing freedom, and closing its eyes on social and economic realities.

Communist regimes are notorious for their cling to power, denying people at least the illusion of change through democratic recycling. It is enough to remember the bloody Romanian Revolution of 1989, the one that ousted Ceausescu. Venezuela might as well be on its way to a similar last resort measure. Today’s political consensus is that ideologies are validated through their effectiveness and not artificially maintained through force. The Soviet intervention in Hungary in 1956 showed that extreme socialism is not shy about killing innocent civilians if it feels threatened.

The Venezuela created by Hugo Chavez and inherited by Nicolas Maduro might not be a textbook communist country, but it did shape itself after the doctrine’s biggest pivot in the Western Hemisphere – Cuba. It is highly likely we will see a mass exodus of Venezuelans, the same way hundreds of thousands of Cubans fled after Fidel Castro came to power.

Probably the biggest trigger of communism revival was the financial crisis of 2007-2008. Entire economies relied on state intervention to keep themselves alive, and the situation made many minds wonder if pure blooded capitalism and the free economy are viable structures for the future. For Venezuela, this was just another drop in an ocean of social and economic instability. The country was blessed (and cursed) with the biggest oil reserves in the world. Venezuela’s economy became increasingly dependent on the fluctuations of the oil price and keeping revenues high meant that other sectors had to be sacrificed, further expanding the country’s one-way addiction.

Periods of hyperinflation, recession, and the intermediary intervals of recovery sent the South American nation on a dangerous roller coaster that is in a deep descent. Most recent reports talk about a humanitarian crisis unfolding, with poverty, unemployment, and hunger reaching levels never seen before. 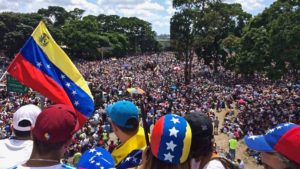 Millions of Venezuelans marching on 20 May during the We Are Millions march.

Maduro followed the recipe of the communist leaders of the past – deny the evidence, blame foreign manipulations for the economic troubles, and label yourself as the only savior. The recently created Constituent Assembly turned Nicolas Maduro into a full-fledged dictator. The card he is going to play seems chosen – continued suppression of any form of opposition and a perpetual consolidation of power.

The lessons of the past have a particular way of making themselves forgotten. Indeed, current democracies and their capitalist work frames do have their shortcomings. However, citizens should remember that the alternatives waiting for them at the extremes of the political spectrum (right or left) are daunting. Communism might be looked upon with admiration and even nostalgia by the young generations that were born after the turning point of 1989, and who made from Che Guevara a hero worthy of appearing on trendy t-shirts. However, evil lurks in the shadows, tempting with left populist promises cheered by thousands of paid supporters, embracing new forms of deceit, and creeping as a parasite, driving host states dangerously close to failure.

With all eyes set on Venezuela, the big question remains – how will it all end? Will Maduro create Gulags the same way the Soviet Union sentenced millions of its citizens to a slow death in Siberia? Will foreign powers agree on a joint intervention to pacify the country and enforce genuine democracy? Whatever happens, Venezuela is bound to be added to the history books as another tragic lesson on communism failure, hopefully, one of the last aftershocks of the earthquake that shattered human society throughout the last century.

Apocalypse Now…or Later…or Some Other Time

Action Movies That Made Us Want Our Money Back