Back in 2016, the National Museum of Modern and Contemporary Art (MMCA), Korea put on the third Modern Masters exhibition highlighting modern art pioneer, Yoo Youngkuk. Youngkuk’s sense of practicality paired with incredible aesthetic sense made for an astounding combination of traits relayed through the art. The virtual tour of this exhibition, exposes Yoo Youngkuk’s dynamic, geometric abstractions from the comfort of their own home.

The 100th Anniversary of the Birth of a Korean Modern Masters

MMCA partnered with Google Cultural Institute when the exhibition opened to celebrate Youngkuk’s centennial in cyberspace, as well as in person. To do this, 20 of the 150 paintings captured digitally using Google’s Art Camera, a robotic camera that can produce high-resolution “gigapixel” images. This online publication and simultaneous physical exhibition using this type of device was the first time Google had done something like it in Korea. It has allowed people all over the world to access Youngkuk’s creations (for free, I might add!).

Youngkuk left his home of Uljin, in the North Gyeongsang Province of Korea, for Tokyo in the 1930s to study art. When he later returned to Korea in 1943. During the Pacific War, he sustained himself by working as a fisherman and brewing and selling his own liquor. While he needed to put his art making on pause during this difficult time, he did not let go of it. Once he was able to fully resume his art making in 1955, he became the leader of several art groups in Korea, such as Modern Art Association, Contemporary Artists, and New Realism. Doing so established him as one of the spearheads of Modern Art. 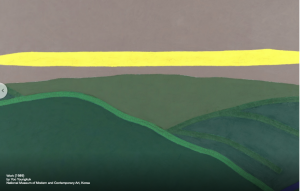 Youngkuk dedicated his art to abstraction, which sets him apart from his peers who tended to begin as figure painters who then turned to abstraction later on. Yoo Youngkuk started out with abstraction and stayed with it until his death. He utilized basic elements of painting such as lines, planes, forms, and colors to illustrate his pieces. Taking from nature, his paintings exemplify an essence that is simple, yet powerful. From his colors to juxtaposition of shapes to the texture, the audience cannot help but wonder if there might be deeper meaning within each painting. Take Work (1989) for example; the rolling hills with a small patch blue in the lower right hand corner might make the viewer wonder about the smallness of the presumed body of water compared to the large bar of yellow, potentially a sun-type object, floating above. The perception of the landscape feels massive and warm, but also a bit nostalgic.

A pioneer of Korean abstract art

In 1964, Youngkuk ended all associations with art groups and held his first solo exhibition. It both surprised and jolted the Korean art field. Yoo Younkuk devoted himself to working alone in his studio from eight am to six pm every single day. He churned out over 400 paintings by the end of his life. Though he expected nothing to sell until after his death. He was surprised when purchases began at 60 years old.

Youngkuk said to his son once about his art, “If you like it, that means it’s well done.” He believed in creating what felt right to the artist, to what felt right for himself. He stayed true to himself and thus became a model for many other artists out there. Somehow, Youngkuk was able to cope with the turbulent times he lived in without letting the trauma overwhelm him. He kept to his rigid sense of artistic identity. This allowed him to keep working and live the way he wished. The exhibition intends to renew people’s appreciation of Youngkuk. It will share his wonders with not just the locals of the museum, but all over the world through the virtual tour. To find the tour, click here and see Yoo Younkuk’s work for yourself.