On February 15th, 2020, the New York Botanical Garden (NYBG) opened its 18th annual Orchid Show, themed Jeff Leatham’s Kaleidoscope. Set to close April 19th, unfortunately the show is closed earlier than that due to the COD-19 pandemic. However, NYBG’s director of Glasshouse Collections and Senior Orchid Curator has recorded a virtual tour of the show and it is currently posted on the NYBG website for all to see! The floral creations this year were created by Jeff Leatham, famed artistic director of the Four Seasons Hotel George V, Paris and floral designer to the stars.

“Color is the first and most important aspect of my work, always. I want every gallery to be a different color experience,…like looking into a kaleidoscope.” – Jeff Leatham

With sections of the historic Enid A. Haupt Conservatory still under renovations, Leatham had an incredible opportunity to transform the space like never before. His bold and colorful vision to create captivating installations in each gallery that transform as the viewer progresses is certainly reminiscent of a kaleidoscope. 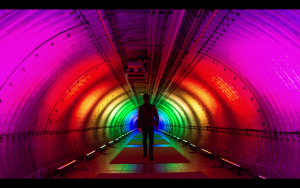 Upon entering the first gallery is a glorious mirrored Vanda fountain surrounded by foliage and a grid of electric purple and intense magenta Vanda orchids. The gorgeous layout of flowers above the mirror sculpture at the heart of the fountain is an incredible installation. Also around the fountain is a type of orchid named after Leatham: Vanda Sunanda Jeff Leatham. This flower was named after him back in 2017 by an orchid nursery in the Netherlands called Ansu Vanda.

Leaving the entrance gallery, Leatham formed a calming, meadow-like transition to the following gallery. In considering how the viewer would progress through the Orchid Show, Leatham wanted a calming sense during the transitions to not overwhelm the audience. In this meadow-like path is one of NYBG’s greatest orchids in their collection, the Darwin Star Orchid. This orchid is native to Eastern Madagascar and has a special history in that Charles Darwin himself theorized about the pollinator who fed on this flower’s nectar: one whose tongue is long enough to reach all the way down the orchid’s lengthy tube. Darwin was only proved correct 40 years after he made this theory.

Though orchids are not often found in the desert, there are a few varieties that can thrive in those conditions. The desert galleries showcase those orchids along with the cacti and other types of colorful flora that flourish in the desert. The orchid family is one of the largest families of flowers with naturally occurring breeds that grow in almost any condition around the world. This is what makes the orchid such a special plant. 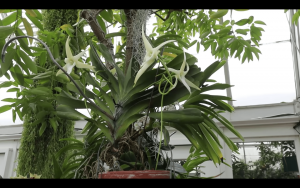 Leatham continued his goal to create a seamless immersive experience for the visitors by taking advantage of every point of the Conservatory, even parts that otherwise go unnoticed. Around the stairwell that brings visitors from the desert galleries to the rainforest gallery. He used succulent baskets, phalaenopsis, and other types of flowers to cover the curved wall in a spectacular textural effect. This staircase leads to the tunnel that typically is a simple, undecorated passage through the galleries. Leatham created a continuous colorful experience by installing LED lights in the tunnel to light it up in a moving rainbow that guides the visitor through.

The Orchid Show ends with a stunning display of orchid arches, specifically designed to complement the existing architecture and flowering vines of this gallery. As the arches are above a reflection pool, creating a sunset-like effect completely surrounding the visitors. Ending the show on this note leaves the viewer with a breath-taking last view of the Orchid Show. Leatham certainly completed his goal of creating an immersive, kaleidoscope event for the audience. Using bold, dense blocks of color, he formed unforgettable floral designs.

5 Fascinating Facts About Alcatraz, the World’s Most Famous Penitentiary