It’s a story that’s gotten a lot of coverage. “Mysterious void found in pyramid!” the headlines shout. “Scientists baffled!” The reality is less science fiction, but at the same time, a bigger deal. The Japanese and French scientists responsible for the find are not actually that surprised – they found a small void in the pyramid already – but they are very excited about the technology they used to identify the space.

The project is called ScanPyramids, and their mission is to create a 3D image of the Great Pyramid’s interior using “muography.” What are muons? They are subatomic particles created by cosmic rays from space. What’s really cool about them is that they can penetrate stone deeper than x-rays. By directing a stream of muons at a structure, scientists are able to measure density changes. When they used the technique on the Great Pyramid, they identified an excess of muons, which means a void. They were able to measure the new void’s size at about 100-feet long and 26-feet high. 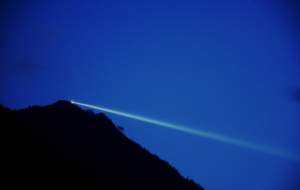 So, what is this “void?” ScanPyramids will not call it a “chamber,” and the most accepted idea is that the void is in place to help relieve stress from the stone’s weight. These types of spaces are have been seen before, and demonstrates just how talented the pyramid builders were.

That’s what the archaeologists are excited about; the void’s discovery gives them a better idea of what the pyramid’s interior looks like and how it was done. The media coverage would lead the public to believe this void is a totally new, shocking discovery with possibly mysterious implications, but this isn’t true. Egyptologists and archaeologists are actually pretty annoyed by this.

Egypt and the pyramids have been the subject of some really wacky ideas. Edgar Cayce, a famous psychic whose clients included Thomas Edison and Woodrow Wilson, believed that Egyptians built the pyramids with the help of Atlanteans (as in, Atlantis) using levitation. That’s apparently more believable than an ancient civilization possessing building skills superior to modern humans.

The pyramids have a lot of strange Biblical theories surrounding them. John Taylor, a British publisher, wrote a book about who built the Great Pyramid, and decided that it was Noah, as in Noah and the ark. Taylor’s reasoning is based on a bunch of complex calculations that somehow show that the Pyramid holds a “divine system” of truth. Another author believed that when you measure all the passageways in the Great Pyramid using pyramid inches, you find a chronology of Earth’s past and future. 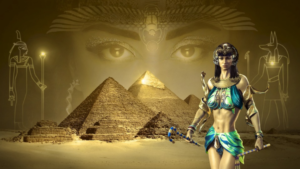 Many have a view of Egypt as fantastical as this picture

The oddest theory about the Great Pyramid has to come from Joseph Franklin Rutherford, a leader in the Jehovah’s Witnesses. He believed that Satan built the Great Pyramid as an altar to distract Christ believers from their true purpose. This was a direct contradiction of Rutherford’s predecessor, who taught that the Great Pyramid was built by God. Rutherford said that people caught up in pyramid worship should repent for having wasted their time.

While most people aren’t worshiping the pyramids, there’s certainly many who get caught up in the “mystery” angle. To keep people’s interest, documentaries often latch on to concepts like “King Tut’s curse,” while The History Channel has sold itself by hyping up the show “Ancient Aliens” and theories about “ancient astronauts.” The reality is that ancient Egypt was not a land of magic and pure mystery. The big news about the Great Pyramid’s void is that it shows how effective muography is, and that it’s possible to learn more.

Speaking of Atlantis, what are four of the weirdest theories about this “lost continent?”