“But, where would we go to charge it?” Tell me that question isn’t familiar, whenever electric vehicles come up.  The question is becoming easier to answer but it isn’t entirely without merit. Charging stations outside of urban areas can be a challenging target for vehicular hide and go seek. Piggybacking on our article about Toyota’s plan to offer an all-electric option on every model by 2025, Gildshire noted this from Volkswagen. The German automaker intends to install almost 3,000 electric car charging stations in the United States alone. In March, the German automaker plead guilty to three felony counts of installing secret software in vehicles. With this announcement, VW hopes to erase memories of its noncompliant emissions past. According to Reuters, plans are well underway. 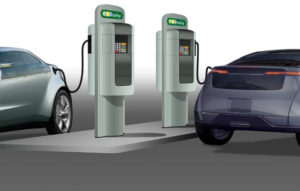 Volkswagen’s plan is part of a company-companion unit known as Electrify America. The group selected charging station companies SemaConnect, EV Connect and Greenlots to install the U.S.units. The lack of prominent charging stations is listed as the top reason for concern by a whopping 39% of potential electric-car customers surveyed. Range, which is definitely related to a shortage of charging stations, was the only other reason cited by more than 20% of the survey respondents.

While it won’t entirely alleviate deep rural concerns, this move by VW provides a definite step up in terms of electric availability for many of this nation’s motorists. According to Volkswagen, almost 85% of Americans live within the projected reach of a proposed charging spot. “Projected reach” means within 20 minutes to a recharge. Currently, about 61% of American drivers are within reach. That number isn’t high enough to move the needle on electric for car buyers, however packaged and promoted.

Mark McNabb is the Chief Executive Officer of Electrify America. He said this, about the plan:

“One of the biggest barriers to the mass-market adoption of electric vehicles is access to chargers, but this is an unprecedented opportunity to help create the electric vehicle infrastructure we need across the U.S.”

So, the next time someone asks that question from above, don your VW hat and say, “Follow me, to fossil fuel freedom!” It can be your Braveheart moment.

Technology News: The Future of Retail Technology and More