Watermelon cake provide a refreshing treat without the carbs, gluten, cholesterol and uncomfortable heat caused by using an oven during the summer months. Ideal for a barbeque or family picnic, they are also low in calories compared to traditional cakes, require very little preparation time and offer a unique and unconventional substitute to typical summer desserts such as fruit salad, ice cream and popsicles.

So let’s talk watermelons and then talk cake… 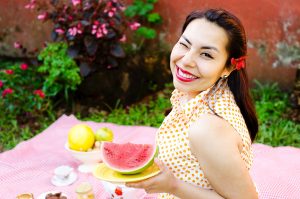 Originating in southern Africa where they can be found growing in the wild, watermelons began their slow progression to North American kitchens several centuries ago. With its journey traced back to a cavernous Twelfth Dynasty site, to a pharaoh’s tomb, into the hands of the Moors and Europeans who ultimately brought it to the US in the 16th century, these fruits have nothing if not longevity. However, although they have been proven to be a favorite amongst societies all over the world, there is always room for improvement and scientists are currently working on developing seedless and disease-resistant varieties.

Derived from the Norse term “kaka” and of Viking origin, cakes have a long yet traceable history as well. In effect, kaka was initially nothing more than a sweetened bread, yet over the course of time, it underwent an evolution of sorts. The Greeks added goat’s milk and leavening agents to it, adding a flair to what had been a relatively simple dessert and the English, in turn, perfected sponges years later during the Renaissance period. Today, cakes can be divided into several different categories: yeast, butter, sponge and coffee varieties in addition to chiffons, cheesecakes and more.

Cut the melon into the shape of a cake

Pat the melon dry with paper towels so that the topping can adhere to it.

Mix the Cool Whip with the vanilla extract and honey

Massage – The Oldest Therapy in the World