The middle class steered the ship of the American economy and used creativity, upward mobility, and employment dynamism to succeed. It was the heartbeat of American leadership throughout the world. It was the middle class that pulled the United States from an agrarian, largely moribund, economic entity into the envy of the industrial world. We were the success story that spawned the term “success story.” Good-paying jobs (usually union-affiliated) were available with only limited formal education.

That was the United States of America 1875-2008. Now, the middle class in this country is disappearing as information gleaned from the Federal Reserve Board and Pew Research tells us. 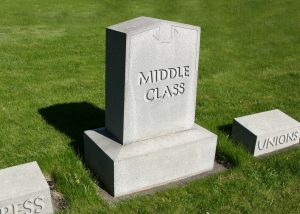 What happens to it next is anyone’s guess. The prospects are far from optimistic.

What went wrong? Or, did anything go wrong? Do we need a middle class? These are the questions economists are struggling with as the new economy appears before them. Gildshire Magazines decided to do a little research on our own.

We know that the wealth gap between the rich and poor has grown to unfathomable and impossible lengths. Since the 1980s, the distance between the two has been hard to span. Americans are getting either richer or poorer.

But to be “middle class” is to be securely between the top and the bottom, and there has been a drop in the percentage of middle-income households across the nation.

So, is the remaining middle class closer to the top (we hope) or the bottom (we fear)? Unfortunately, fear wins.  The gap between the upper and the middle class has grown much wider. Americans are getting richer (infrequently) or poorer (persistently). The drop in the percentage of middle-income households across the nation has proved to be precipitous.

The wealthiest 10% of U.S. households earn approximately 28% of income in this country. But, that same segment holds 76% of U.S. wealth, which is a higher percentage than in similarly wealthy nations. In other words, the wealth of this nation is stuck, and the middle class is disappearing because of it.

Let’s define our terms. Income is what we earn. Wealth, on the other hand, is what we own (our house, car, retirement savings etc.) It self-perpetuates. That means that the rich tend to stay rich, and the poor usually stay poor. With such a large percentage of U.S. wealth being held by the richest few, one can see how the other 90 percent could be struggling to thrive, or even survive.

By definition, the middle class isn’t poor. However, the items long considered the essentials of life are getting harder for the remaining middle class to afford. Housing costs are skyrocketing!

For context, go to New York City, San Jose, or Seattle. Tell a realtor you are interested in purchasing a house in the $100,000 range. Then watch the realtor’s face. 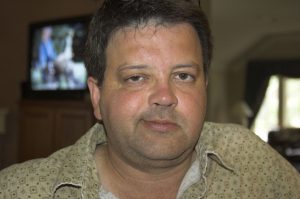 A hundred grand, you say?

The Education Piece of the Equation

As far as education, there is a growing concern that the value of a college education isn’t worth the money it takes to receive one. The cost/benefit of a Bachelor’s Degree stagnated in 1998 and has stayed that way ever since.

In fact, recent college graduates are taking jobs that don’t require a college degree. Joe College, who graduated with his Bachelor’s didn’t expect to be distributing frozen custard for Leon. 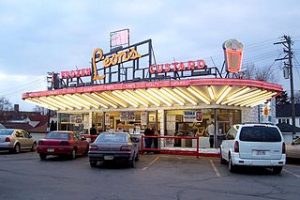 No disrespect intended to Leon. He serves delicious frozen custard.

Who can blame Joe? Rather, he is to be praised for his industriousness and willingness to make the best of a bad situation. There are more college graduates on the market than ever before and Joe represents graduates facing a national student debt total of over $1.3 trillion. This year marks the 18th consecutive year that education debt has increased in this country. Since 2009, outstanding loans for education have doubled. No other form of household debt has risen as sharply, and it isn’t even close.

Harsh facts, and ones that bode ill for the future of the middle class. Carrying college debt into post-college life makes maintaining a middle-class life challenging at best, and a pipe dream, at worst. There is a host of expenses facing the new college graduate. Often, just staying afloat feels like success.

The Reason Why People Avoid Dentists? It’s Not Fear!

The Smallest Religions in the World