There was a day when a dog show would attract ten or so of your best friends, and they would golf clap as the hounds carried on in front of them. After that, tea and scones under the banyan tree. But that was before the annual Westminster Kennel Club soiree’ took hold of the American consciousness. Now, tens of thousands hover over the television, curious about how the Chow Chows would do in the non-sporting category. The dog owners, dressed in their formal finery, put the animals through their paces before a capacity crowd at Madison Square Garden. When Bob Dylan sang, “Times They Are a Changin,” he almost certainly wasn’t thinking about Samoyeds or American Staffordshire Terriers. But his sentiments apply. 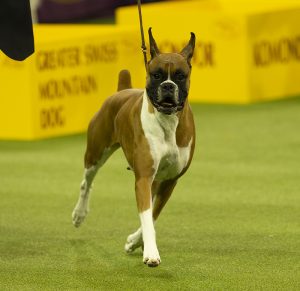 First up was the Junior Handler competition.

The competition kept the winner on his toes. But, Johnathan Wehry and his cocker spaniel GCHS CH Cameo Siloet’s Gold Coast Legacy found the winning combination of handler and hound for the title.

Highlights of the Breed

These competitions revealed an impressive turn by Afghan Hound by GCHS CH Sura Fabelhaft Fifth Avenue CA. She is five years old and a winner in the Select Bitch competition. Wearing armband Number Eight but a ten in the eyes of the judges.

The Afghan Best of Breed competition was a barn-burner

But GCHP CH Agha Djari’s Fifth Dimension of Sura won it in the end. Observers on site were not surprised since this dog has impressive breeding backing her. He comes out of Ch Agha Djari’s Burlesque, and his sire is Ch Sura’s Hollywood Nights JC. Breeder Stefan Boieck had plenty to work with in this impressive dog. Owners Suzanne J Neill, Jamie Souza Bartlett, and Christine O’Connor have reason to be proud.

The Terrier Group is always an entertaining one, and this year was no exception. At the end of the day, three-year-old (and barely that) GCHB CH Irvonhill Voignier was the winner.

Gildshire enjoys the pomp and pageantry of the entire Westminster Kennel Club competition, but the whippets always draw our attention. They are charmers and hard-workers all in one small package. This year, GCHG CH Pinnacle Kentucky Bourbon took home the big prize in her category. She was a crowd favorite who did not disappoint. Owners
Justin Smithey, Dr. Ken Latimer, Judy Descutner, Nancy Shaw, and Cheslie Smithey beamed as they placed the winning recognition around the still-alert winner. 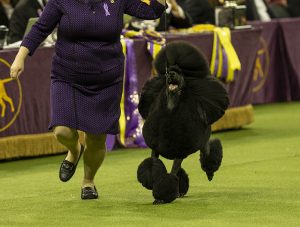 But, of course, the biggest prize, and the loudest applause of the night was saved for Best in Show. When the drum roll ceased, and the lights came up, it was standard poodle bitch GCHP CH Stone Run Afternoon Tea, who took home Best in Show honors. This black beauty took in the accolades as if she was born to receive them. Breeder Connie S Unger matched sire Ch Dassin Hillwood Lazarus with dam Stone Run Girl Reaction, and came up aces! We have no doubt that this lady will have a Happy Birthday next month when she will turn five.

The schedule for next year’s Westminster Kennel Club show reveals that the agility competitions will take place Feb. 13, 2021, and the conformation portion of the competition gets underway two days later in the Garden. Tickets to the show can be procured through Ticketmaster and will become available about six months before the events.