In 2008, 23andMe was named Invention of the Year by Time Magazine. The “23” in their name refers to the 23 chromosome pairs in a human cell. Labeled as a biotechnology company, 23andMe sells genetic testing right to consumers, which allows people to learn about their ancestry and even their health. However, the company has earned its share of controversy, and may not be as upstanding as they claim to be.

So, how does 23andMe work? There are currently two packages available. The cheapest one, at $99, is the Ancestry Service. By sending in a sample of your saliva, you get a summary of your global ancestry and resources that let you find relatives who share your DNA. The more expensive one, and the one that has gotten the most attention, is the Health + Ancestry package. You receive over 75 reports on your ancestry, physical traits, and genetic risks for diseases like cancer. All a person has to do is buy a package, get a kit within 3-5 days, follow the instructions, and send it off. In about 8 weeks, they’ll get an email notifying them that their online account is ready.

Seems really cool, right? In theory, yes, but 23andMe has a murky history. In 2013, the FDA directed the company to stop marketing because it did not have the approval required for organizations releasing health-based information. The concern was that the results were not accurate. 23andMe did stop selling the health portion of their tests, and in 2015, started up again after getting FDA approval. However, that isn’t the most concerning aspect of the company for personal security experts who have been watching 23andMe. 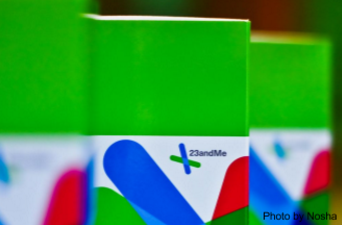 s it will not sell customer’s individual genetic information, it will sell clusters of information made up of multiple users’ info. Unfortunately, that doesn’t provide much protection for users, because it is very easy to identify individuals based on just a few strands of DNA. If your relative sends their spit off to 23andMe, the company is getting a lot of information about you, too. The FDA has its hands tied, as well, because while they gave 23andMe approval, they have no control over what the company does with your health information.

Why does health information privacy matter? In the worst case scenario, if an insurance company knows you have a genetic disposition to certain disease, they might refuse you coverage for disability, long-term care, or life insurance. There is no law that protects you from this type of discrimination. In the best case scenario, 23andMe could provide valuable information to medical companies working on finding cures for disease. However, the point remains that you don’t have much control over your own information once you send off your spit. For some people, this isn’t a huge source of stress and they just want to learn some interesting stuff about themselves, but for others, it might be troubling. It’s important to at least understand what you’re getting into with 23andMe.

How to Keep Your Skin Beautiful in Summer