Home » Healthy Lifestyle » What is Aquafaba?

For vegans, the humble egg is difficult to replace. Egg whites in particular are tricky, but oh-so-important in foods like mousses, French macarons, angel food cakes, homemade marshmallows, and more. What can be done? The solution is aquafaba, which combines the Latin words “aqua” and “faba,” which mean water and bean, respectively. The specific bean is the chickpea, because the water in the can is clear, tasteless, and has a texture nearly identical to egg whites.

The name was invented by a 45,000-strong Facebook group about vegan meringues. Other name suggestions included “bloop” and “l’egg.” In 2015, a member of the group (Goose Wohlt) registered Aquafaba.com. On the site, you can find a brief history of aquafaba, which seems to begin in 2007, when a forum poster called “Susie” said she was experimenting with a new egg replacer. She never revealed what it was. There were sporadic mentions of egg replacers through the years, including a video of chickpea water being foamed and used in chocolate ganache, but it wasn’t until Goose made adjustments and sugar to create vegan meringues. He posted his discovery, and the rest is history. 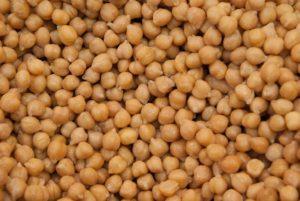 Chickpeas contribute to the texture of aquafa

In just three years, this bean water has taken the vegan community by storm. You can find countless blogs featuring aquafaba as an egg-white replacer in pancakes, waffles, chocolate mousse, mayo, and more. There are also several books like Aquafaba: Sweet and Savory Vegan Recipes Made Egg-Free with the Magic of Bean Water and Aquafabulous! 100+ Egg-Free Recipes Using Aquafaba.

Chickpea water is especially popular in bars that need to make drinks, because cocktail served with foam traditionally use egg whites. However, the raw whites have a strong smell and could make customers sick. Aquafaba has none of those problems. Commercially, the fancy condiment brand Sir Kensington’s has begun making “Fabanaise,” which is a mayo substitute that uses aquafaba and kombu seaweed. About a year ago, a chef (Diane Forley) began selling vegan, kosher, and nut-free meringues using the magical liquid. You can find marshmallows, meringue lollipops, kisses, and more. All the ingredients are organic and the color s come from fruits and spices. 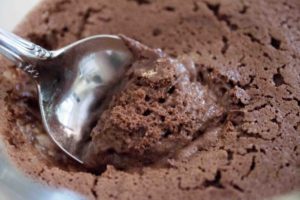 Light, fluffy mousse made with aquafaba

Using chickpea water at home is pretty easy. Buy a can of chickpeas and shake. Drain the liquid into a bowl. If the aquafaba is too liquidy, it’s a good idea to reduce it on the stove. Once thick enough, whisk into a foam. 1 tablespoon of foam equals one egg yolk, 2 tablespoons replaces one egg white, and 3 tablespoons takes the place of a whole egg.

Fresh chickpea water lasts about 1 week in the fridge. You can even freeze it in ice cube trays, and then when you’re ready to use it, just thaw it back into a liquid and use like regular aquafaba.

———–
Replacing eggs is all well and good, but how is a vegan to replace meat? Click here to find out.