Home » Healthy Lifestyle » What is Needed to Do Great Things?

How can you achieve great things in life? In your career maybe? Imagine if you were pushed to the limit to test your skills or endurance. You push as hard as you can, harder than you ever did. Every inch forward is agony (think push-ups) and you are ready to give up. Then, you see your rival, and you see all the people who count on you. You remember how everyone is expecting more from you. You can’t give up now. What do you need to do to achieve the best? You need to push even further. What is needed to do great things? You need to see yourself as a part of something larger than yourself. 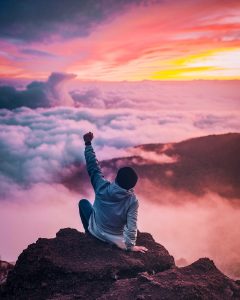 This might sound counter-intuitive, but if you want to accomplish something big, you need to think about yourself as a small part of something big. You are a small part of something greater than you. If you want to win a game or improve your record in anything, the easier way to start even when victory looks far away, is to imagine there is something bigger than reaching the goal but that small part is crucial to the big picture. Giving up is the easiest part. If you have all eyes on you and people are counting on you, it’s more difficult to give up. Although you can’t meet everyone’s expectations, you feel like you have to do your best. The only thing you have left to do is to push yourself, no matter how much it hurts.

If you are a member of the team, it’s easier to see yourself as a part of something bigger. Especially if you are a part of a sports team. Not everyone can see themselves as a team member or as part of something big. After all, we live in a society where individualism has a priority, and it’s almost the main ingredient of success. However, as the founder of CoachUp, Joran Fliegel pointed out in Entrepreneur magazine, the number one key to success is to find that connection between individual and team success. When each member of the team realizes how their success and performance leads to the success of the team, that’s when they meet their goals and win big games. For a dream team to be a dream team, each member has to see themselves as a part of it, not as an individual who is trying to be number one in the team.

This kind of thinking doesn’t apply only to sports teams and those competing against each other. There are plenty of examples of people who succeeded because they decided to step out of themselves and out of their comfort zone.

As a Holocaust survivor and psychiatrist, Victor Franklin said:

You just need to find a strong WHY! That’s the main reason why religious people tend to overcome things easier than those who don’t have strong religious beliefs. Those who are religious see themselves as a part of something greater than themselves.

A study published in 2001, in The Academy of Management Review found that hospital janitors perform better when their work is perceived as a part of something bigger. Their job is explained to them as a mission of helping patients to stay healthy. They were also happier with their work when their job was explained to them as a crucial part of preventing infections from spreading among employees and patients.

The next time you feel tired and without any motivation, try to see the bigger picture and remember all the people who are counting on you.