What to Do While Isolating: Favorite Board Games

Home » Home & Garden » What to Do While Isolating: Favorite Board Games

Yesterday afternoon, a commute that always takes 52 minutes, instead lasted 36 minutes. Downtown is mostly deserted, making Seattle, Washington look more Shedd, Oregon. The schools are closed, maybe for the next six months. Luckily, you are well-stocked with toilet paper, because that’s a real thing! Besides washing your hands every 15 minutes, what now? Today, Gildshire begins a series on what to do while everyone is at home with a look at some favorite board games.

Our friends at Board Game Geek rank this as their highest-rated game, so we thought we would give it a go. Each team gets a word-set. When your turn comes, you draw a card with a series of numbers. These numbers are the order of the word for which you are supplying the clue. For example, if your secret words are “doughnut, Egypt, mountain, and rock,” and you draw 2-3-1, your team tries to guess “Egypt, mountain, and doughnut.”

Sounds simple enough, but here is the kicker. The opposing team will be trying to guess the words, as well. If they guess correctly, they get the points. 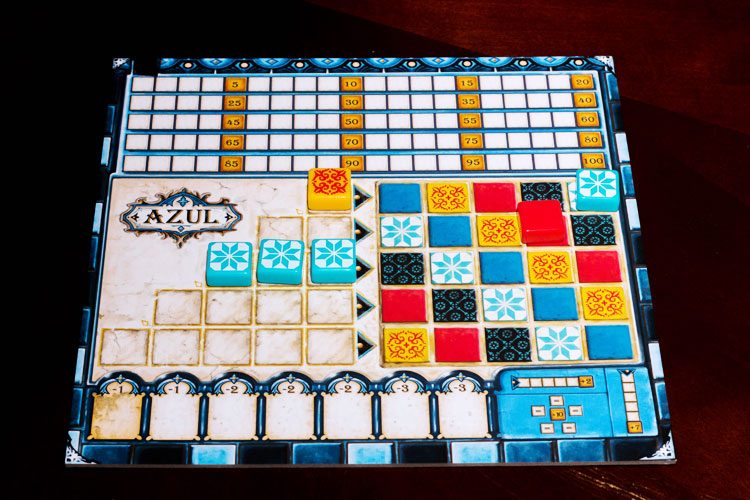 A new and favorite board game: Azul

Stay with me now. It will be worth it. Azul mirrors the aesthetics of Moorish Portuguese art. Player/artisans compete to decorate the Royal Palace of Dvora’s walls with beautiful tapestries.

I know, but it isn’t as complicated as that sounds. You place tiles strategically on your board, thereby scoring points. Be careful, though. Pay attention to your colors and pattern. Plan ahead, and play defensively when necessary, and aggressively when you can. It is a beautiful game, but one that’s rich in strategy.

Azul won the Spiel des Jahres (Game of the Year) award in Germany two years ago, and that is just one of the awards it amassed. We aren’t surprised, because it is the game that most captivates Gildshire while self-isolating. It is at once strategic and fun, while being playable for young and old.

You would be hard-pressed to discover a game more profoundly ridiculous than Taco Cat Goat Cheese Pizza. Yes, that is the real name, and you had best remember it. You’ll repeat those words in order. Again and again.

Start with a deck of cards full of fun pictures of those five words. Deal all the cards. When it is your turn, toss your first card on to the central pile. Say the next TCGCP word. If there is a match, everyone slaps their deck. The last player to slap takes the stack of cards. The first player out of cards wins.

Wait, because the craziness is just getting underway! There are some other, not-TCGCP cards in the deck. When the gorilla shows up, the players pound their chest and slap the pile. Take the stack if you’re last. When you see a narwhal, clap your hands over your head and slap. When you see a groundhog, pound on the table and slap. Expect bruises and wrong actions.

I admit to rolling my eyes when I heard about Taco Cat Goat Cheese Pizza. Was it a game for 3-6-year-olds? But we played and laughed. And it happened again…every time.

These are some of Gildshire’s favorite board games, but use this list as a jumping-off point. If you are more of a Monopoly Marathon kind of family, go for it. The important thing is to spend some time together, albeit six feet apart, while we weather this storm together.