Home » Home & Garden » What Will Be The New Mid-Century Modern? Revisiting Other Past Decor Trends To Discover The Next Comeback

We know the mid-century modern comeback has continued to be more enduring than anyone could have predicted. It began to gain a real foothold thanks to the nostalgia-drenched set design on the show Mad Men, which debuted all the way back in 2007. The elegantly-tapered legs and minimalist lines make it both evocative of times gone by and incredibly fresh and new. Now that mid-century modern has moved out of high-end showrooms and TV sets and into retailers like Target and Walmart, it’s safe to say it’s established a foothold. But it made us wonder: what other nostalgic design trends are due for a comeback of their own? Read on to see what our research has revealed:

The name sounds a little intense if you aren’t familiar with it, but brutalism dates back decades to the area immediately post World War II when limited design materials and a lack of time for anything fussy led to government materials being used to construct buildings out of steel and concrete with no other adornment. By the 1970s, brutalism was also found inside, as people left concrete floors unfinished and steel beams left exposed in their living spaces. The trend has had its moments since then: in the late 1990s, it felt like everyone had a divorced dad who lived in an unfinished industrial loft in a gentrifying warehouse district (or maybe that was just us). Brutalism has some things in common with mid-century modern , like clean lines and minimalism. But where mid-century modern is sleek and polished, brutalism is rough and raw. It does integrate well with other styles though if you don’t mind pushing some boundaries: it can be fused with farmhouse-style decor for an industrial-rustic style that is fresh and modern. You can also elevate it in new ways: doing acid-finish on top of a concrete floor can add some intrigue and character, and it’s also very cost-effective compared to many other flooring options. 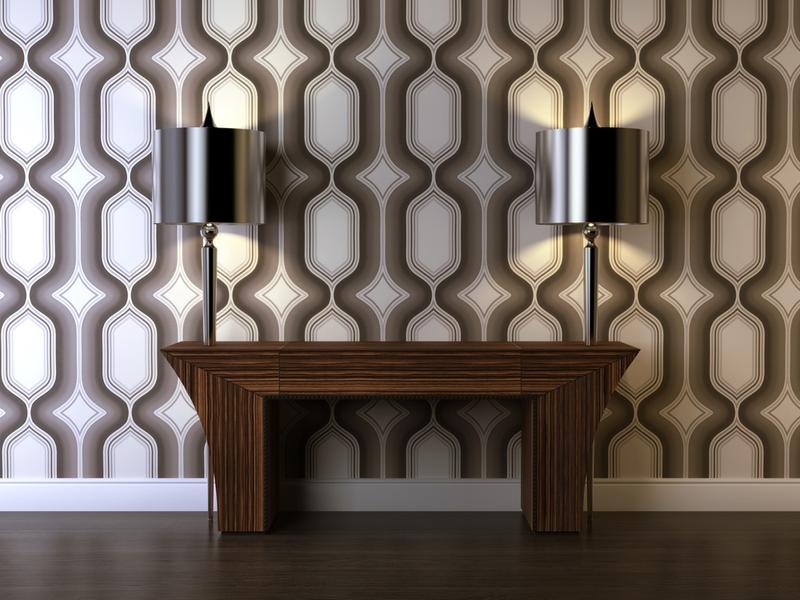 Wallpaper has had its moment several times over. Its use dates back as far as the 1500s, and really rose to prominence in the 18th century.

Wallpaper has had its moment several times over. Its use dates back as far as the 1500s, and really rose to prominence in the 18th century when it was found in the homes of the wealthy elite and middle class alike. It’s made several resurgences over the years, including at least three distinct time periods in the 20th century. But in the past few decades, most design-savvy people have concluded that this is a stale and dated trend that might finally be dead. Still, like a phoenix, wallpaper is rising from the ashes and its use is trending upwards once again. These days we know that less is more: instead of using busy patterns on every wall, designers are taking a different approach. Many are using minimalist botanical prints or clean geometric patterns. If you like a more lush and complicated pattern, you can also always just wallpaper one accent wall and choose a hue of paint for the other three walls that emphasize it.

Several separate 1970s trends have been making independent comebacks, but they can actually be fused together quite beautifully. While wood is common in mid-century modern design, it’s usually polished to a high gloss. But wood furniture in the 1970s had a very natural, unfinished feel that’s making a comeback. Bamboo, and raw wood in golden tones encapsulate the era, especially when set off by indoor plants. Odds are you’ve already embraced succulents, but you can elevate that even more with ferns in rattan hanging planters. Walls in earthy colors like sage or honey add another layer of warm, natural goodness: adorn them with textiles like macrame wall-hangings to take the look even farther. And for the ultimate in 1970s aesthetic, bring in some brass lamps and accent pieces. Mixing the two disparate 1970s trends of natural wood and gleaming metal makes this a look that’s retro but fresh.

Sometimes our best days are behind us: by looking back at design trends from decades and centuries of yore, we can find the highlights and use them to inform a style that’s completely new. Keep an eye on these design trends in particular, and soon you may find that the past is present.

Kate Wight is a freelance writer and interior design consultant. When she’s not reading and writing about design trends, she’s browsing through thrift stores for depression glass and other vintage treasures. She’s in the process of developing her personal website CollateByKate.com, which will be a destination for design advice and shopping tips.