At first, it was just a road, like any other road. It began, humbly enough, at the convergence of US-Hwy 41 and US-Hwy 54 in downtown Chicago. Then, one TV show and 2,448 miles later, US-Route 66 became the stuff of legend. It connected Chi-town and The City of Angels (Santa Monica, really, but who are we to get in the way of a good story). Route 66 combined the emergence of the muscular place we called the United States with gaudy silliness, camp, and a pathway in and around eight states. Why was it such a big deal, and moreover what is left of it today? Gildshire, who once took you on The Greatest Road Trip Ever Taken, asks those questions today.

Why is Route 66 so important?

The cynic might answer, “Who knows?” But that’s because a cynic is a humorless scold with little in the way of imagination. The route held the key to the Spirit of America in a couple of ways. First, it was a symbol of a country on the move. Commerce, and plenty of it, traveled the route, as trucks traversed Route 66 on the way to the enormous ships that waited at both ends. These ships would carry American-made goods across and around the globe.

But Route 66 wasn’t a symbol of the country solely because of the commercial paper that traded hands on either end. The route made the family road trip a reality. It was a ribbon of road from the Industrial midwest, across the plains, and to sunny Southern California. Unlike the Interstate freeways of today, the route didn’t go around the cities. It cut right through them, dotted with roadside advertisements that hawked, “EZ-Rest Motor Court, $5 a night,” and “Main St. Diner. Pie and coffee, 25 cents.”

And drive it we did, with 8-cylinders underneath us and a four-on-the-floor gearshift riding beside us. A ribbon of highway bobbed up and down in the weak (by today’s standard) yellow-ish headlights that beckoned us forward.

It was the best road trip in the world! But, you asked “is,” rather than “was,” so answer we must. You can’t drive it from end to end anymore, even if you set the GPS to “avoid highways,” like Gildshire likes to do. US 66 was rerouted around several larger cities to permit travelers to avoid city traffic congestion. Some of those cities included Springfield, Illinois; St. Louis; Springfield, Missouri; Joplin; and Oklahoma City. So, it is nice to get off the Interstate for a breather from traffic traveling more than 80 mph. But, there is no continuity left of the Route 66 your Daddy loved to drive, his left arm out of the open window, and with cigarettes rolled up his sleeve.

What attractions are along Route 66?

Chin up, little Buckaroo! Sure, you cannot drive the route over 3,000 uninterrupted miles. But, there are still plenty of things to see along the way. Here are just a few: 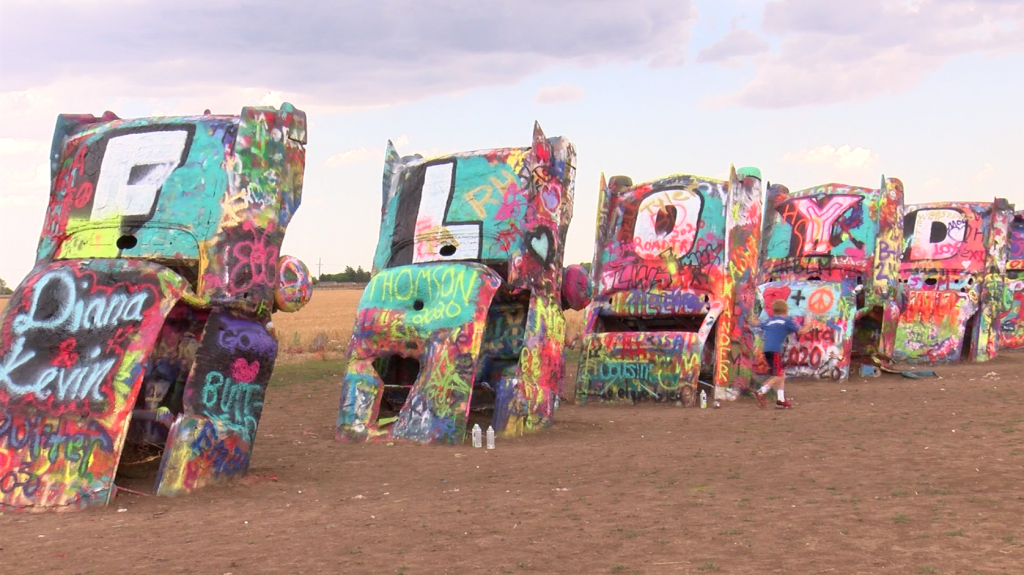 It takes a road like Route 66 to host Cadillac Ranch.

What parts of Route 66 are still open?

Perhaps the better question is, “What parts of Route 66 are still standing,” because time waits for none of us. The little Motor Courts that were such a part of the landscape are, literally, part of the ground, destroyed in favor of a big box store parking lot.

But that doesn’t mean Route 66 has been forgotten. Enthusiasts wish to bring it back as a reflection, however slight, of its faded glory on what is now about 1400 miles long. A tight community of preservationists, mostly travel agents along the Main Road of America, has allowed many to relive Americana history. For a trip down the famous road, contact the folks at Two Lane America for more information.

What Could You Do With an 800 Dollar Loan?

What Are Your Feelings Trying to Tell You?