Home » Our World » What’s Next in Automotive: Windshield Tech Wars!

Here in our offices, we are aware of two things. First of all, you come to Gildshire expecting sexy. (Naturally). Second, windshield technology isn’t the sexiest topic. However, if your windshield was iced over, and your wipers were frozen in place this morning, we have news you need to hear. Most of the country has winter temperatures resulting in hazardous frozen driving conditions during the winter months. It’s a pain! Even cars with heated washer systems take more time than you have in the morning to warm up and start working. Enter Ford with a better idea and the first shot fired by a major carmaker in the windshield tech wars. Roadshow by Cnet helped with the research.

“My windows froze solid this morning. What does Ford have in mind?”

The VisioWiper system is a genius idea, and it gets to debut on the Lincoln Aviator. The VisioWiper has its own built-in heating element. It dispenses heated fluid to the frozen windshield through nozzles integrated into its wiper blade.

“Is this really different or another version of the lame system on my car right now?”

We think this system has real potential. The VisioWiper warms to eighty-six degrees in just four minutes. That’s hot enough to clear any windshield in less than five minutes. The VisioWipers are in Lincoln’s “Elements” package. If you’re saving on extras, but still want the new wipers, they are $1,000 and come with heated seats in the back.

“You started with ‘windshield tech wars.’ So, who else is in the war?”

“I should have known.”

Yes, you should have known. Tesla wants to clear your windshield with lasers and pictures “pulsed laser cleaning” for “debris accumulation.”
According to Tesla’s patent application, a beam optics assembly produces a laser that hunts and destroys debris. Detection circuitry will inform the system when and where to fire. Anything from dirt to bird droppings will trigger the system.

“That sounds like it would be hard on the glass.”

Tesla says safeguards would be in place to ensure the laser would neither cut through the glass or harm the occupants inside the vehicle because the laser would be calibrated to penetrate only to the exact surface area of the glass. 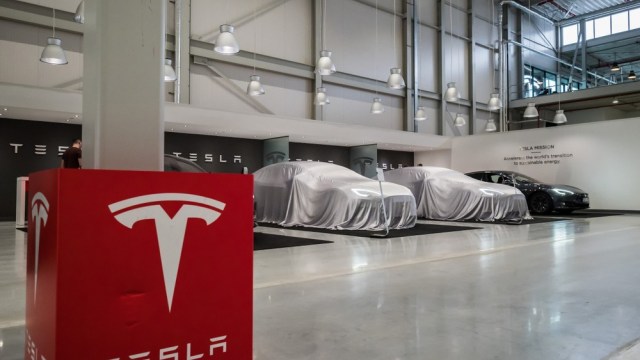 Tesla’s plans to win the windshield tech wars are under wraps here in their production facility.

“That sounds pretty amazing, but if Tesla says they can do it, I suppose we should believe them.”

Well, we should take any patent application with a grain of salt, because those applications are made long before a product is ready for prime time. By that, we don’t just mean patent applications from Tesla. But, it gives observers of the industry a hint as to the mindset of the R&D within the company. It can only mean that changes are coming to an automotive process that has long been ignored. Actually, “war” may be incorrect because these two systems could work together. Your windshield thawed and cleared in mere minutes. Happy employees on the way to work in cold weather.

“In the Tesla Cybertruck!”

Well, we remain unsure about that, but we’re pretty sure that advancements in how you see from the driver’s seat are on the way. Call them windshield tech wars or just ideas coalescing together. But, soon enough, you will see the road ahead better than ever.

How to Surprise Your Girlfriend with Your Romantic Deeds

What is the Best Gift You Can Give to Your Child?