Imagine entering the darkness and dampness of a cave. Feelings of claustrophobia grip your heart, but you resist the urge to run. The light from your flashlight hits the wall and you see images – animals, handprints, shapes. Some of the most famous cave paintings were found purely by accident. Four teenagers discovered the Lascaux paintings when they followed their dog into a cave. Thousands of years old, cave paintings give us a glimpse into the minds of ancestors long dead. Sometimes, the most unique cave paintings can be tricky to decipher.

These unique cave paintings were created around 30,000 B.C.E. There are lions, panthers, and bears. The cave is also home to the earliest example of a painting of an active volcano. What’s especially intriguing about Grotte Chauvet is the presence of what experts call “the Sorcerer.” This half-human, half-bison creature wraps around a drawing of a woman’s lower body. Who is the Sorcerer meant to represent? What is the relationship between him and the woman?

Translating to “the Deer Cave,” this collection of cave paintings consists of around 3,000 figures on the walls and ceilings. The figures are painted in red ocher and black alongside different shapes. There are many scenes of deer hunting, which is what gives the cave its name. Experts aren’t sure what the paintings mean, though they do agree the art is advanced. Many believe the deer scenes relate a creation story. The hunter might play the part of a mysterious ancestor of the painters. 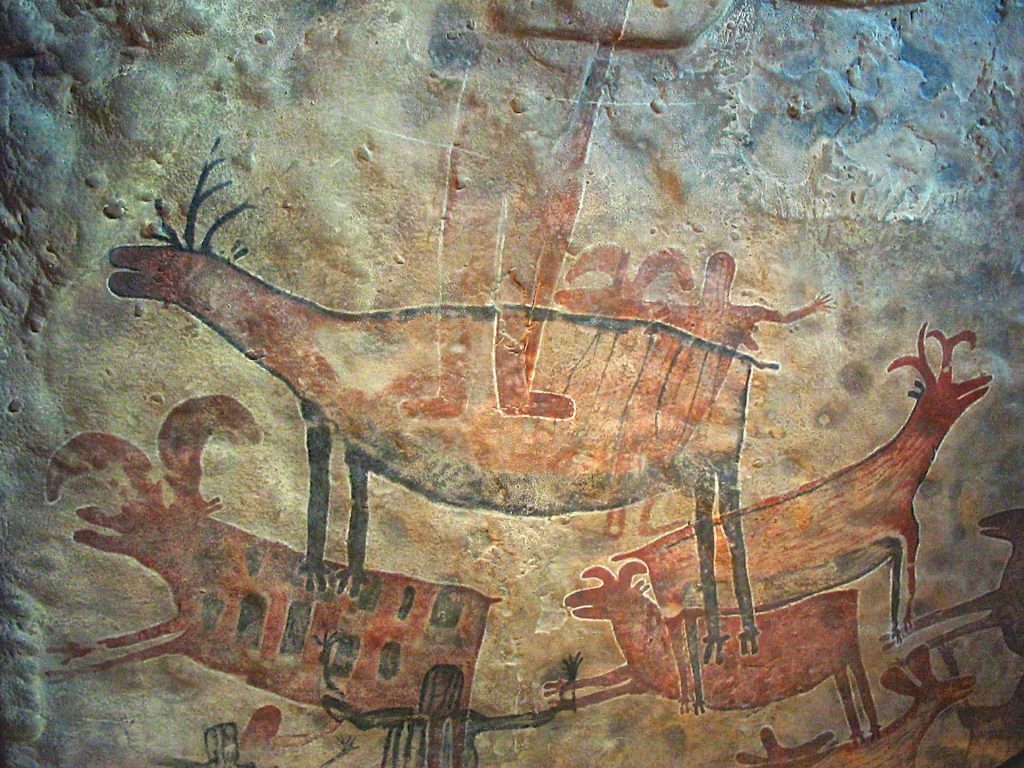 If you go to the sandstone cliffs in Sego Canyon, you can find a collection of petroglyphs created over 8,000 years. The art includes depictions of around 80 life-sized, mysterious figures. Many are missing their arms, legs, and eyes. Some hold snakes and have symbols representing water or life on their bodies. At a glance, these figures almost look like aliens, but they’re most likely an example of shamanistic art. Shamans believed they could communicate with spirits. In their visions, they traveled to places like the underworld using hallucinogens. This mysterious art could represent those rituals and visions.

About six years ago, people discovered 10,000-year old cave art depicting what looks like a UFO. The craft has three points coming from its base. There are also large figures wearing headgear like helmets and even antennae. True believers immediately suggested that the cave art told a story of alien contact. One expert points out that the painter’s active imagination could explain the art. When put in a larger context,  the paintings match what experts know about with shamanic art, so that’s another explanation.

In French and Spanish caves, you can find plenty of handprint art. What’s odd is that many of the hands are missing fingers. Experts have debated the reason for years, and there are a few theories. The “boring” answer is that these painters lost their fingers due to frostbite. Some of these unique cave paintings are found in places where frostbite isn’t common. The more interesting theory is that people intentionally amputated their fingers as part of a ritual. Researchers could be unto something.

Many people believe cave paintings feature alien beings. Whether aliens exist remains one of the most famous mysteries of all time. Some famous mysteries, however, have already been solved.