Why Bottling Up Your Emotions is Bad For You

Why Bottling Up Your Emotions is Bad For You

Everyone has emotions, but not everybody is good at expressing them. You’ve more than likely heard the cliches of men being bad at dealing with emotions and instead choosing to bottle them up. This does happen a lot, but any person can bottle up their emotions. No matter what your gender identity is, it’s going to be unhealthy to keep your emotions locked away.

Keep reading to learn about several reasons why you shouldn’t bottle up your emotions. Understanding the potential negatives of being emotionally shut-off might help you to make better decisions. It might not feel natural for you to discuss your emotions with others, but it’s definitely going to be healthier.

It Can Lead to Outbursts

You’ll often find that bottling up your emotions will lead to you having emotional outbursts. Instead of dealing with your emotions now, you’re going to shove them down to deal with them at a later time. This gives negative emotions such as anger and sadness time to fester. When negative emotions compound due to you not dealing with them for a long time, it’s possible that you might have a severe outburst.

Have you ever seen someone have a huge angry outburst? Sometimes this happens even though nothing really bad happened that should have caused them to get so angry. This could be happening because that individual chose to bottle emotions up inside instead of dealing with them in healthy ways. Your emotions don’t disappear when you ignore them and they might come back to give you problems at a later date.

It isn’t unusual at all for a person to feel lonely when they aren’t good at expressing their emotions. If you have a tough time dealing with your feelings, then you might also have a hard time connecting with others. Instead of being able to be honest about feelings like love, it’s going to feel easier to just push things down. Everyone desires companionship, though, and you’re likely going to wind up feeling very lonely if you continue to bottle your emotions.

Even if you do have people in your life, it’s still going to feel lonely if you aren’t being open with them about your emotions. You might feel isolated or alone due to not being able to express yourself fully. Sometimes this can make a person become severely depressed, too. 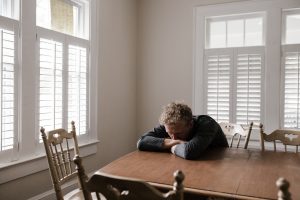 Why Bottling Up Your Emotions is Bad For You: Loneliness

Sadly, there are lots of people out there who turn to bad coping mechanisms when they can’t express their emotions properly. This means doing things such as drinking alcohol to deal with sadness or smoking when they’re feeling anxious. When you do things like this too much, it’s going to have a really negative impact on your body. Some individuals struggle with addiction as a result of not being able to properly cope with their emotions.

Of course, not dealing with your emotions in healthy ways can lead to anxiety and depression issues. Sometimes you will go through things in life that will make you sad, angry, or listless. If you deal with these things in healthy ways, then you might be able to feel better before too long. When you choose to bottle those emotions up, it can wind up making things worse and making you depressed.

If it gets to this point, then it’s going to be a good idea to reach out to someone who can help. You can discuss how you’re feeling with your doctor so that you can pursue treatments. There are many treatments for depression and anxiety, but therapy might be the most helpful thing. Therapy is a great way for people to address emotional problems, and you could learn how to express your emotions in healthy ways.

There are many types of therapy that can help people learn to express their emotions. Some people benefit from primal therapy, but others might want to pursue traditional psychotherapy options. Just having a professional in your corner is going to make a huge difference. You can learn to deal with your emotions the right way so that you won’t struggle any longer.

Marie Miguel has been a writing and research expert for nearly a decade, covering a variety of health-related topics. Currently, she is contributing to the expansion and growth of a free online mental health resource with BetterHelp.com. With an interest and dedication to addressing stigmas associated with mental health, she continues to specifically target subjects related to anxiety and depression.